Greenwashing: The Link Between Sustainability and Company Value 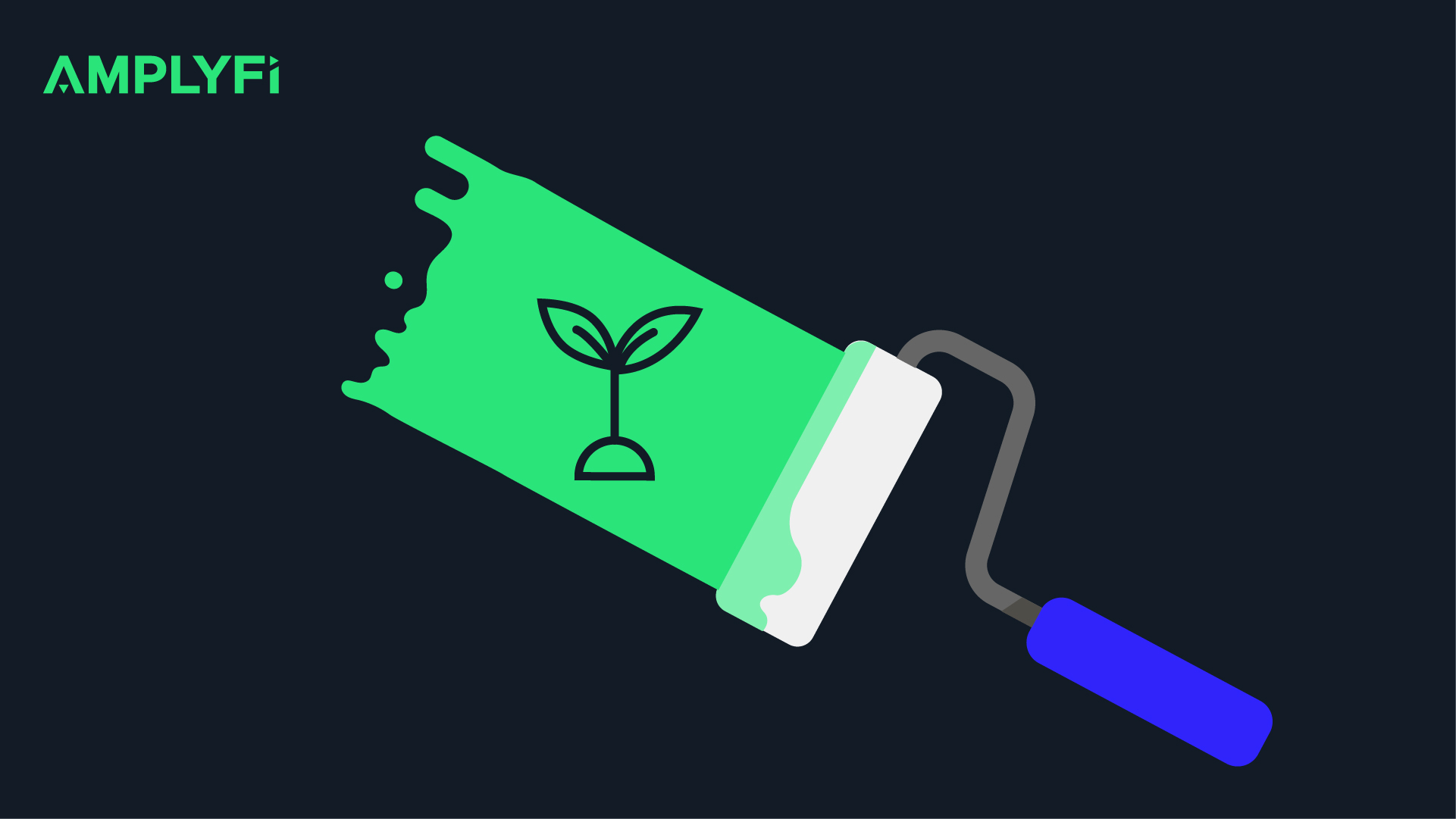 Greenwashing is the practice of falsely marketing or overstating a company and its products as being environmentally friendly. Until recently, it was one of those corporate practices that, like tax avoidance, was considered immoral but not illegal. Exposure and public awareness of greenwashing activities can negatively affect the performance of an enterprise and may even force it to exit a market, withdraw products, or discontinue marketing campaigns. Using AMPLYFI’s AI-driven research platform we have unearthed unique insights into the greenwashing landscape. Our technology leverages machine learning and data science to deliver insights by analysing and making connections across structured and unstructured data at scale to uncover previously hidden links, trends, and opportunities.

Since the dawn of the industrial revolution, heavy industrial activity and personal consumption patterns have accelerated climate change, pollution, soil erosion and led to the degradation of air and water quality, the very elements that help sustain life on our planet. These trends have accelerated over the past 60 years. More recently, there has been a seismic shift among conscientious consumers, investors, and businesses to engage in sustainable investing or Environmental, Social and Corporate Governance (ESG) investing.

In 2015 the United Nations Framework Convention on Climate Change (UNFCCC) in its Paris Agreement established a multilateral goal for 190 countries to achieve zero greenhouse gas (GHG) emissions. Since then, countries and regions have unveiled their roadmaps for achieving “carbon neutrality”. The European Union (EU), for example, has set a net-zero objective by 2050 articulated in its Green New deal. It has committed a €1 trillion investment plan, InvestEU, to finance its policies and has estimated that approximately €260 billion a year will need to be invested by 2030 if it is to meet its targets. Central to the EU’s response is a circular economy action plan that focuses on resource intensive sectors such as packaging, batteries, automotive, plastics, electronics, textiles, construction and buildings, food, water and nutrients.

Just three years after the Paris Agreement, a 2018 report by the International Panel on Climate Change (IPCC) sounded an alarm by advocating that a global temperature rise of only 1.5 degrees Celsius above pre-industrial levels from the generally accepted 2-degree rise is essential to avoiding catastrophic environmental disaster. The science underpinning the report makes it clear that current plans to cut carbon emissions, reduce fossil fuel usage, and remove carbon from the atmosphere, do not go far enough.

In response to the UNFCCC and IPCC’s call for action, an increasing number of organisations are making very public commitments to achieving carbon neutrality to ensure that no additional carbon is added to the atmosphere. Over 1,000 companies globally have committed to working under one, or multiple, climate target schemes such as the Science-Based Targets Initiatives (SBTi), RE100, and others.

Such actions are not prompted by the need to achieve regulatory compliance and maintain licences to operate. There is strong evidence to indicate that ESG metrics have become a significant factor in enterprises attracting investment and securing funding. A survey by Ernst and Young in 2019 showed that 91% of the investment institutions that it approached take ESG risk into account when making investment decisions. In 2020, the Financial Times reported that over the past ten years, the majority of ESG funds had outperformed the wider market. It is becoming increasingly apparent that companies making very public carbon reduction and neutrality target commitments are more likely to secure funding for energy and sustainability projects. AMPLYFI’s analysis supports this trend, revealing that the popularity of ESG funds and investments has increased year by year (see chart below) with 2020 witnessing a significant increase.

As well as the investor community, there is growing evidence that consumers are increasingly differentiating between companies with net-zero public targets and those without. For instance, 73% of American millennials will prefer to purchase from a company that regards climate change as an essential issue for society to address.

With these emerging drivers, it is clear why greenwashing may be perceived as a viable short-term strategy for a company – acting as a “virtual green sticking plaster” to try to shore up businesses and reputations. However, such tactics are usually short-lived as exposure of greenwashing practices increasingly represents serious legal, financial, and reputational risks to a company. In addition, by failing to translate claims into concrete action, greenwashing will undermine the longer term targets that countries and businesses have set within the Paris Agreement, national action plans, or private sector commitments.

Over the last two decades, governments have increasingly moved to legislate against greenwashing. In 2008 the Canadian Competition Bureau, jointly with the Canadian Standards Association, outlined guidelines for advertising environmental claims. The guidelines prohibit the use of false or vague claims and lack of proof for claims made in adverts. In the United States, the Federal Trade Commission (FTC) similarly articulates guidelines for green advertising and the consequences for violating their policies. Since 2018 the Australian Consumer Law has prohibited businesses from giving false or misleading representations, including greenwashing. The law provides guidelines for green advertising and outlines penalties for violation, including fines, injunctions, corrective advertising, and community service orders. The European Union is also negotiating timelines for the implementation of taxonomy regulations that would be used to determine sustainable finance opportunities and bring an end to greenwashing.

AMPLYFI’s analysis showed that regulations related to greenwashing have been mentioned in major regions such as North America, Asia, and Europe, with the United States, China, and the United Kingdom leading the way. 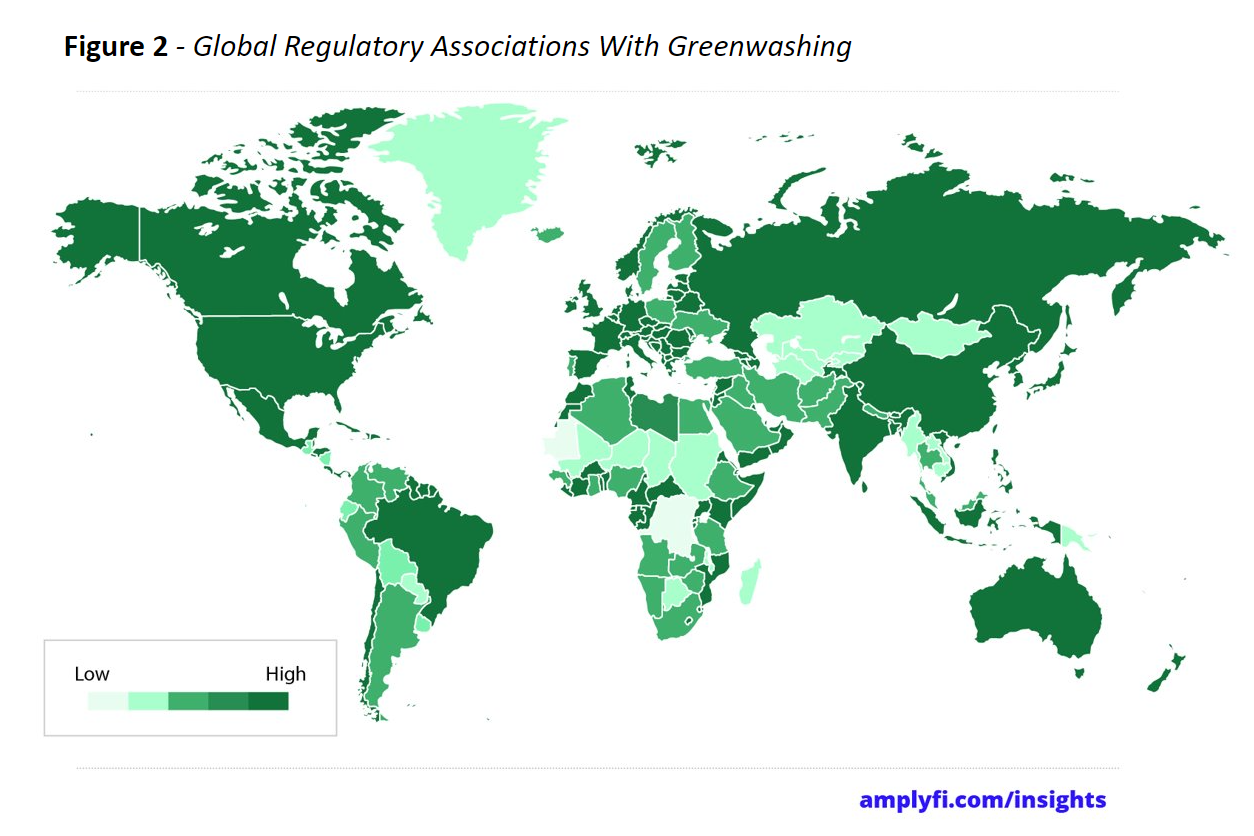 With the law and public perception stacked against the practice, greenwashing can be seriously detrimental to a business’s performance. It can put companies at risk of being fined or exposed to other significant legal consequences. Once a business has been discovered to be greenwashing, it may also undermine its share price and valuation. A poll of investors showed that 63% would immediately remove a company from their portfolios if a negative governance event was to occur.

Consumers may also choose to boycott a business, negatively impacting revenues and profitability. In 2020 consumers boycotted the oat milk brand Oatly after allegations that a private equity firm that owned a stake in the company had also contributed to the deforestation of the Amazon rainforest. The company faced a consumer backlash as it had previously been perceived as being one of the most sustainable milk alternatives on the market due to its performance on reducing its carbon footprint and water use.

In 2015, the U.S. Environmental Protection Agency (EPA) flagged Volkswagen as selling diesel cars with software that cheated emissions tests. The cost of dealing with the scandal involving an estimated 11 million VW Diesel cars reached $26.7 billion. Shares of Volkswagen (VOW.F) fell as much as 3% as a result, dropping as low as $80 (from over $160) when the adverse news first broke. Fellow German car maker Mercedes-Benz has also been caught up in the legal actions surrounding “diesel gate” and is facing significant fines and claims for compensation. This shows how strongly linked sustainability is to company value, and how quickly greenwashing can fragment value.

Going forth, investors are increasingly seeking ways to assess and monitor a company’s ESG performance. Presently, 72% of investors state that they conduct a systematic assessment of ESG disclosures. China, Singapore, Japan, the EU, the UK, and the US all have some level of requirement for listed companies to file sustainability reports. Whilst both the quality of investors scrutiny and the disclosures may be wanting, separating the fact from the myth can be challenging, it is undoubtedly a step in the right direction.