Sustainable Planning and Urbanisation: Preparing for a Greener Future 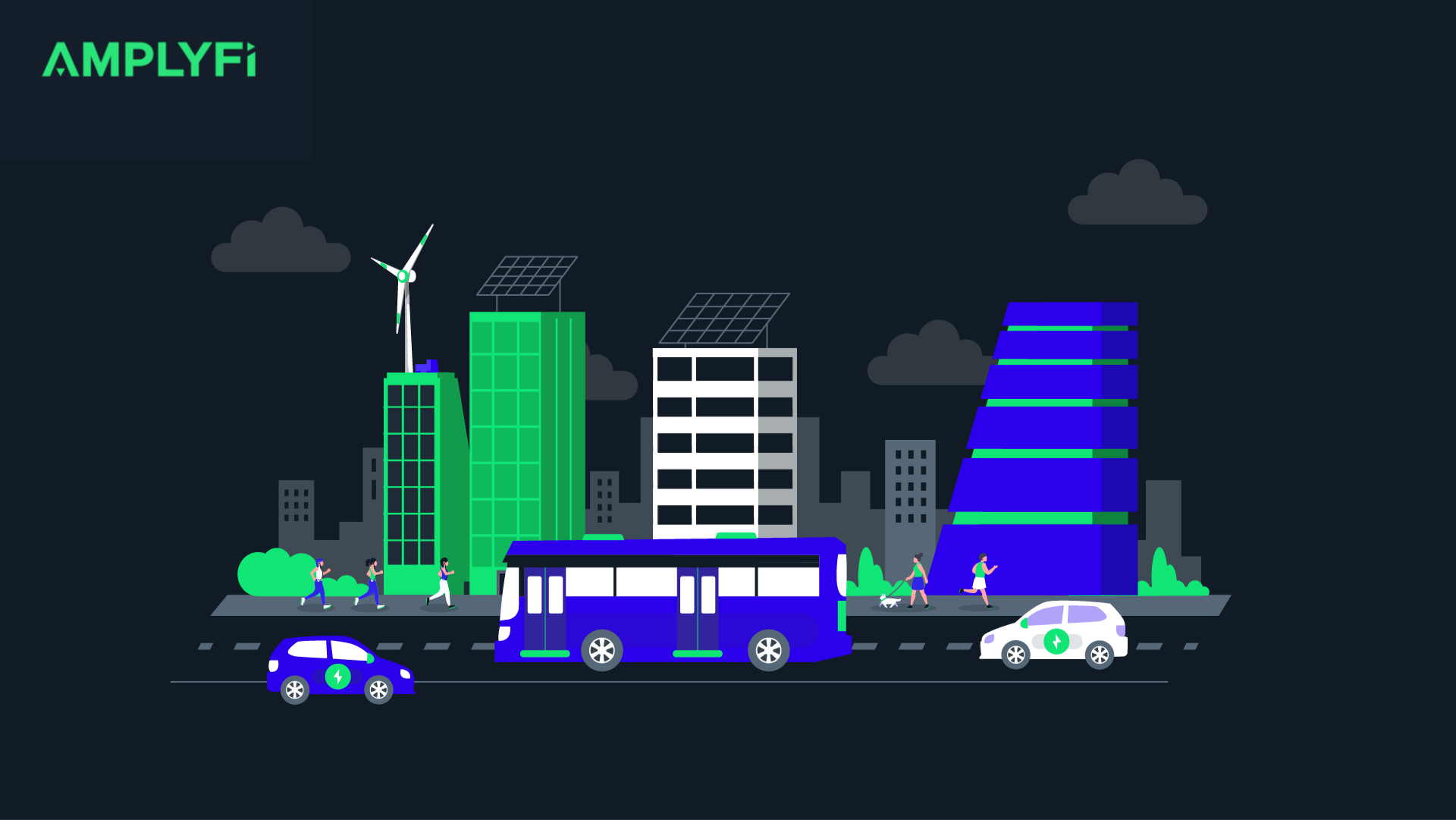 Jon is an associate product manager at AMPLYFI, enabling the inception and development of AMPLYFI technologies through communication with external and internal stakeholders to ensure smooth implementation for customers. Prior to joining AMPLYFI, Jon assisted European based organisations with global procurement and sales.

Sustainability and eco-friendly thinking has become a way of life for more than just the heralded “environmentally conscious”.

Since the Sustainable Development Goals (SDGs) were adopted back in 2015 by the United Nation Member States, there has been an urgent call to action for all countries, states and people to develop their homes in line with tackling climate change. The goals recognise that ending poverty and other deprivations must go hand-in-hand with strategies that improve health and education, reduce inequality, and spur economic growth. Some of the noticeable goals relating to urban planning include access to affordable and sustainable energy or making human settlements inclusive, safe, resilient and sustainable.

While this conversation has been going on for a long time, the COVID-19 pandemic had a massive impact on how cities had to think in the short term. As shown in the document timeline above, before the pandemic there were huge spikes in chatter around this topic, however the onset of COVID-19 in 2020 caused a sharp decrease when governments and developers had to prioritise health and welfare over the sustainable movement.

Yet the conversation didn’t die there. As the world emerged from the pandemic, our analysis shows a recent uptick in news mentioning urbanisation and sustainable planning after 2021. We saw news sources, academic journals and trade publications slowly publish more content that discuss urbanisation and sustainability, resuming a similar document trend to pre-pandemic times. This media coverage suggests a collective recognition of the part everyone plays in our planet’s survival, or potential to flourish, in the next 100 years. The need to plan for the future is becoming increasingly apparent.

By 2050, urban areas are projected to house 68% of the world’s population. These areas will also account for three quarters of total global energy demand and generate over 70% of the human-induced greenhouse gas emissions. With the mass migration of people from rural to densely populated urban areas, urbanisation poses a large risk to our world. This ranges from health problems impacting individuals caused by poor nutrition, housing and sanitation to issues with global impact such as increased pollution, energy usage or poor waste management. But, this shift and demand for more housing also brings many new opportunities to develop climate change mitigation and adaptation strategies through planning and design.

To support the SDG goals, the UN member countries will need to align their planning with some key urban transformation trends to achieve their full implementation by the set deadline of 2030 and beyond.

In a recent report, Deloitte outlined 12 trends shaping the future of cities. Supported by insights from experts, the study identifies where cities can focus their efforts and resources to achieve the SDG goals layed out before them. The trends vary across the whole Environmental, Social and corporate Governance (ESG) spectrum, from more well-documented trends like green planning of public spaces and circular economies to more innovative concepts like ‘15-minute cities’, in which cities are designed with all amenities within a 15-minute walking or cycling distance.

Trends around Sustainable Planning and Urbanisation

Using AMPLFYI’s machine-learning driven technology platform, we have conducted analysis to understand the most talked about topics in published news, and compared them from 2015 to the current day.

AMPLYFI’s platform analysed thousands of documents from 2015-2016 and identified key phrases, displayed below.

The results show the prevalence of different talking points surrounding sustainable urban development and planning. Specifically, discussions of “clean energy” and its consumption in urban areas is prominent.

Back in 2015, power generation, as it is today, was the single largest carbon emitter – and by a big margin.  The power market emitted 12.6GT CO2 globally in 2015, an amount still expected to double by 2040. Another report, by CDP, detailed the 2015 makeup of 162 cities’ energy sources, with only 35% of the cities reporting that a large proportion (over 75%) of their energy production was from non-fossil fuel sources. At this time, many cities began to set new targets for 2030, in line with the SDGs being adopted in the same year.

The SDG 2030 agenda started a motion for years to come to keep cities and governments accountable, for the contributions, or lack thereof, they’re committing to helping solve the climate crisis.

In the analysis of documents dating from 2021-22, we see a similar corpus of keyphrases, with terms synonymous with energy and its sustainability – signifying it as a clear focus for all cities, even 6-7 years onwards.

While many cities were just at the start of their sustainable journeys in 2015, they’ve been making leaps and strides since.

In 2021, the world added a record 295 gigawatts of new renewable power capacity. But, the global potential of renewable energy is yet to be fully harnessed. The International Renewable Energy Agency estimates that 90% of the world’s electricity can and should come from renewable energy sources by 2050. China is currently a frontrunner in the space – despite going through mass industrialisation, the country maintained the largest market share of renewable energy deployment in 2021, accounting for 46% of worldwide renewable capacity additions. In regards to our emissions output for energy consumption, we’re far from being in the clear. However, it’s inarguable that sustainable planners for countries and urban areas are looking further than just tomorrow for reconciliation.

Further analysis of the 2021-22 data shows that, despite energy being a large hurdle to conquer, governments and the public are looking towards implementing and improving social living conditions, we can see this through keyphrases such as “affordable housing” and “public transport”. Governments are taking different approaches to these aspects of life, for example the UK government started an affordable home ownership scheme to lessen the burden of buying a new home. While the EU laid out plans to renovate 35 million buildings and create up to 160,000 additional green jobs. Despite being faced with a global crisis which requires planning for the future, the world cannot forget about the people living in current times, their wellbeing, daily struggles and quality of life.

”Despite being faced with a global crisis which requires planning for the future, the world cannot forget about the people living in current times, their wellbeing, daily struggles and quality of life.

Especially in today’s climate, housing prices across the globe have risen dramatically. With the UK seeing the average price rise by a staggering 30% in 6 years, from £200,000 in 2015 to over £286,000 in 2022. The more troubling notion is how wages have not followed that drastic upward trend, with house prices growing faster than earnings in 91% of local authorities in England and Wales in 2021. Even if we mitigate the effects of climate change, if this trend continues most people will be living in a very different state by 2050. Therefore, there is massive pressure on policy makers and governments to fight many battles at once, to make the world sustainable, while also sustaining the current quality of life for its citizens.

Additionally, there is value in understanding the geographical distribution of news discussions in this space to highlight the countries and regions who are most prevalent, for better or worse.

Members of the UN states are consistently well represented in the document corpus of our analysis, given their participation in the SDGs they agreed to adhere to. But not all states are equal. When comparing who is most prevalent in the news versus official rankings towards SDG’s, we can discover some interesting insights. Such as, despite some members ranking higher than others in their total progress towards achieving all 17 SDGs, countries like India are hot in the press due to their population increase and urban future. This can create some inconsistencies in the news, as the countries that get the most media attention aren’t always the ones making the most progress, sometimes it’s the opposite.

Yearly SDG progress reports published by the UN put more attention on fast growing like India and China to take swift action to be more sustainable. Looking at India’s progress towards sustainable development is a good example of this. According to the UN, urbanisation in India will increase to a staggering 50% by 2050, a key driver being rising employment opportunities attracting rural migrants to the cities. However, urban infrastructure development is necessary for this influx of people. Affordable housing and water supply have not been placed in line with the current urbanisation trend. This results in delayed service of amenity or welfare deliverables and poor urban, health and public environments. This trend has prompted mass redevelopment in prominent colonies of Delhi to accommodate mass housing and sustainable infrastructure.

Sustainable planning can be tumultuous. With global events like COVID-19 or the invasion of Ukraine by Russia, it’s no surprise that development plans have to be pushed back in favour of sustaining current quality of life. This constant medium between improving quality of life for current populations versus future generations makes it ever more important to keep a keen eye on “green” methods of living in the coming years.