Is the next pandemic already with us? 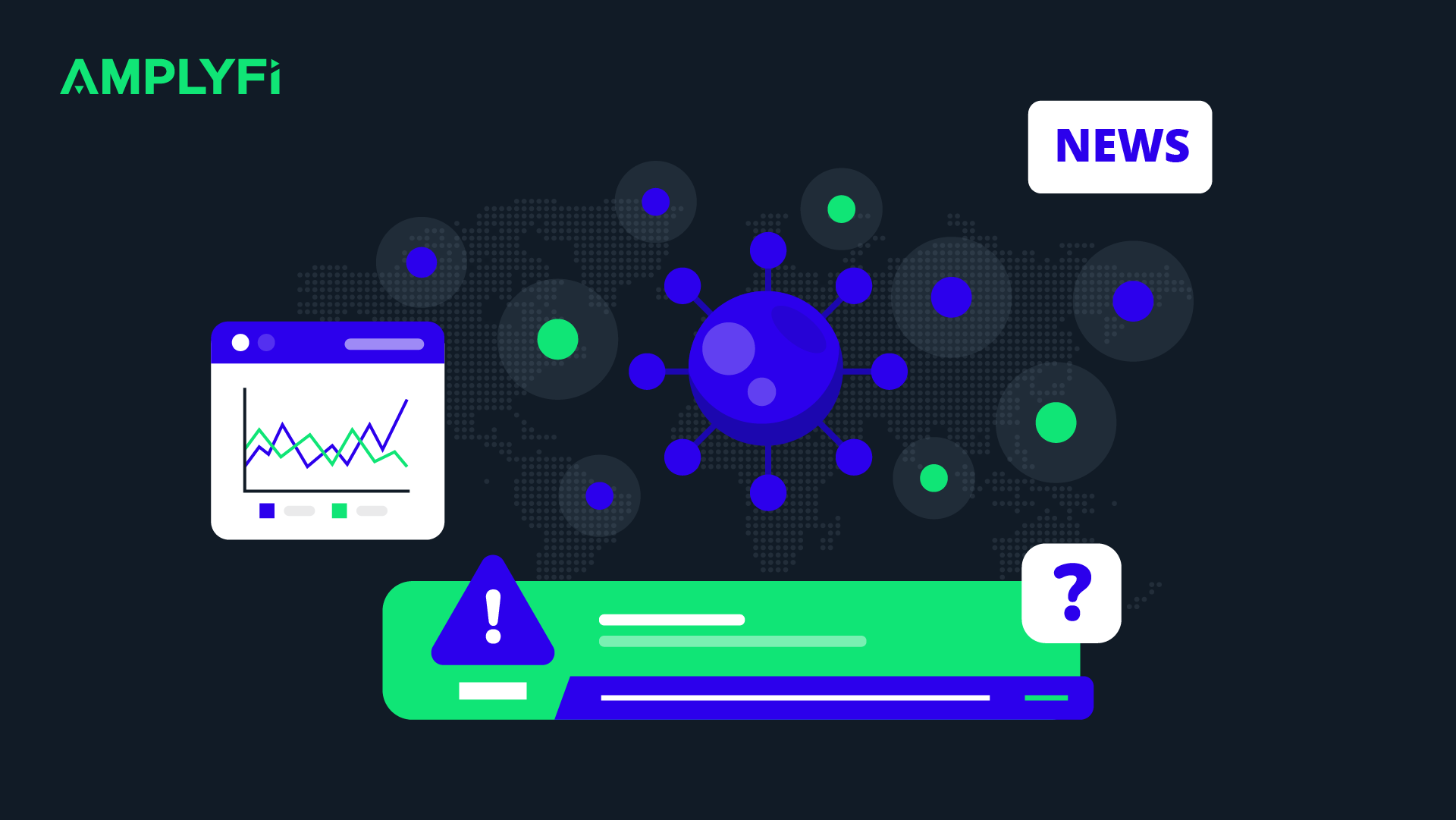 As a co-founder of AMPLYFI, Ian formulates the company’s long term vision and strategy as well as working on innovative projects within the company. With over 25 years’ experience in natural resource technologies spanning industry and government, Ian has held a number of analytical, commercial and leadership roles across BP and is a regular guest lecturer at Oxford, Cambridge and Tsinghua universities. Before founding AMPLYFI, Ian developed BP’s global technology and commercialisation strategies as well as the Group’s Global Resource Base assessment, one of the most comprehensive views of the world’s primary energy resource base.

In this article we highlight how our AI-driven research platform DeepInsight revealed the recent emergence of a new virus, Langya Henipavirus, in China and how, in circumstances similar to COVID-19, news of its existence was significantly delayed in reaching the public domain.

Back in October 2021 we reported on our research into exploring the feasibility of building an artificial intelligence-based early warning system to alert to the potential emergence of the next pandemic. Funded by Innovate UK, we successfully developed a prototype platform capable of monitoring the internet for weak signals into the emergence of new (or re-emergence of existing) zoonotic diseases.

Zoonotic diseases are caused by viruses that mutate to jump between animals and, eventually, to humans. They are common and their impact can range from limited outbreaks (epidemics) such as MERS or the recent Monkeypox, to widespread deadly global infections (pandemics) such as Spanish Flu and COVID-19. Future outbreaks of existing and new diseases are inevitable, and likely to become more frequent as the destruction of wild habitats forces animals and humans to live closer together, and factory farms, hunting, illegal trading and consumption of wild, exotic animal products all continue to increase.

Whilst the exact cause of COVID-19 remains disputed (either occurring naturally or escaping from a laboratory where scientists were studying the virus) it is widely accepted that it originated in Wuhan in China in 2019 with Beijing seemingly initially suppressing the release of information. Chinese scientists were the first to map its genetic sequencing, a feat they achieved on 5th January 2020 with the crucial data only publicly released by lead virologist Professor Zhang Yongzhen on 11th January 2020, a delay of 6 days. This was after the Wuhan Public Security Bureau had acted to warn off whistle-blower Dr Li Wenliang in December 2019. Experts agree that each day of delay, denial, and lack of information sharing was an opportunity lost in dealing with the new threat.

In conducting very high-level analysis of zoonotic diseases in general, DeepInsight plotted the reporting of a brand-new zoonotic disease in China. Called Langya Henipavirus (or LayV) and thought to have originated in shrews, the document trend for the month of August 2022 (see Figure 1) indicates that it was first openly reported by scientists in the New England Journal of Medicine (NEJM) on 4th August 2022. There was then a delay of 4 days before the announcement was picked up and reported by Outbreak News Today on 8th August 2022. From then onwards the story was increasingly covered by global news and media platforms such as Thailand’s Coverage, France’s Le Matinal, and Greece’s Ekathimerini. As well as illustrating some of the agencies that ran the story, Figure 1 also indicates just how short the news cycle was, petering out on 15th August, just seven days later. It has rarely featured since.

Hover over the tooltips to discover the timeline of publications reporting on the outbreak. 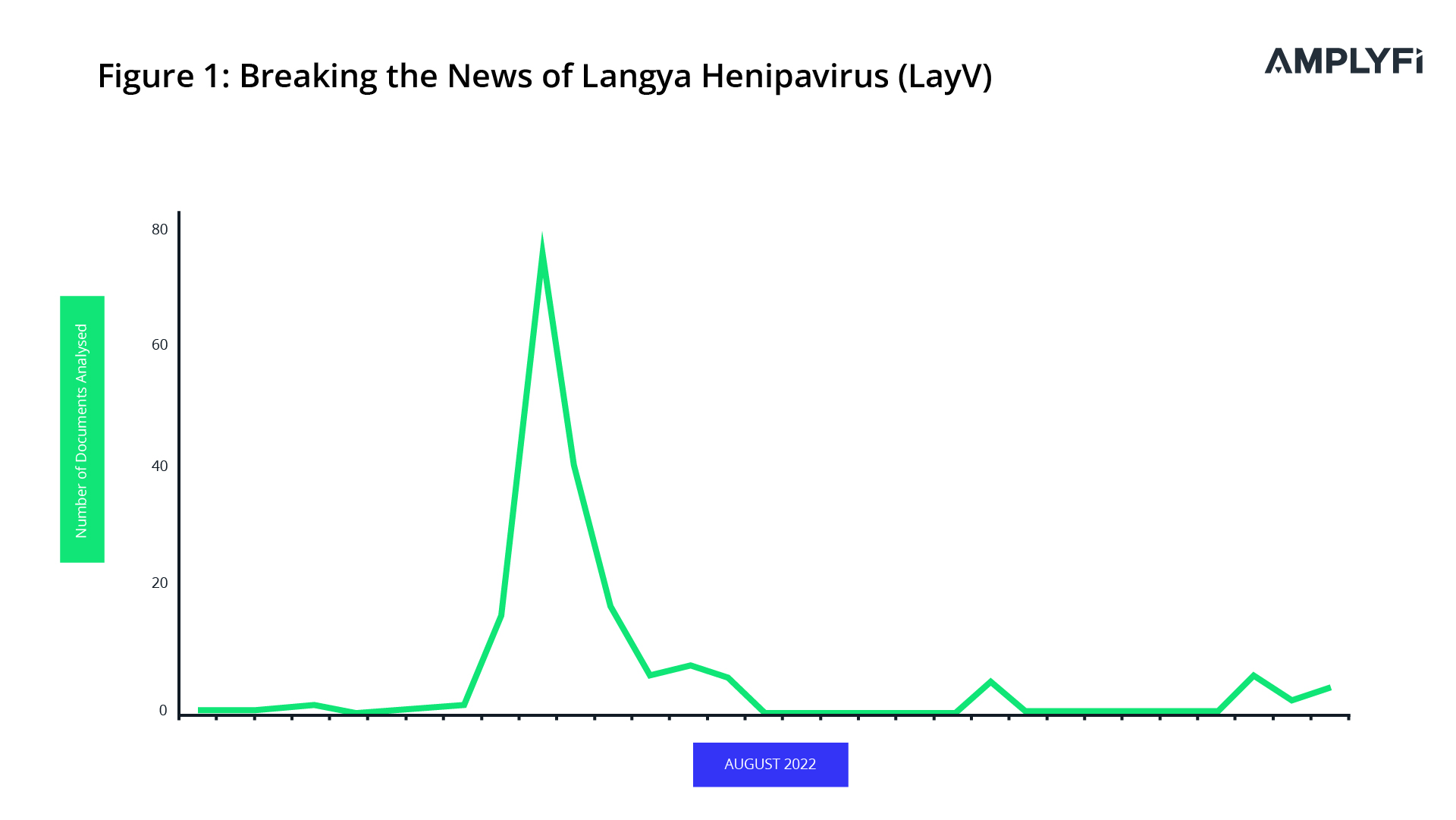 However, the delay in the news agencies disseminating the story globally pales into insignificance compared to the time that it took for the original research into the outbreak to be made public. Delving into DeepInsight’s analysis, it became apparent that, at the time of the reporting, 35 people from China’s eastern Henan and Shangdong provinces had been diagnosed with LayV. The first indications of a novel virus emerging came in December 2018 when a 53-year-old farmer, exhibiting symptoms including a fever, headache, cough and nausea, sought treatment at a hospital in Shandong’s Qingdao city. This represents a gap of almost four years before researchers led by the Beijing Institute of Microbiology and Epidemiology published their findings in the NEJM. Whilst LayV belongs to a family of viruses known to kill up to three quarters of humans in severe cases, scientists were quick to establish that most of the 35 known patients had only exhibited mild symptoms with no fatalities and, at the time, there was no evidence that the virus could pass between humans. With confidence high that this did not represent another COVID-19 type pandemic, the story rapidly disappeared from the news headlines.

”If COVID-19 taught us anything, it is that identifying cases of novel viruses quickly and then rapidly sharing information about potential risks is critical to preventing another pandemic catastrophe.

Globally, 70% of emerging infectious diseases are thought to have passed into humans via contact with animals, a phenomenon scientists say has accelerated as growing human populations expand into wildlife habitats. The emergence of LayV as a zoonotic spill-over event in China comes on top of major outbreaks from other emerging viruses there in the past two decades, including SARS in 2002 and, more recently, COVID-19. If COVID-19 taught us anything, it is that identifying cases of novel viruses quickly and then rapidly sharing information about potential risks is critical to preventing another pandemic catastrophe. However, as LayV demonstrates, delays in the public reporting of critical events still persist. To reduce the risk of an emerging virus becoming a global health crisis, conducting active surveillance in a transparent and internationally collaborative way is essential. The prototype zoonotic disease monitoring and early warning system that AMPLYFI previously demonstrated could become a powerful tool for scientists to conduct continuous global monitoring of the internet for those vital weak signals to potential emerging disruption.

In a recent project with the Centre for Security and Emerging Technology (CSET) at Georgetown University, we showcased the progress that our collaboration has made in pushing the boundaries of artificial intelligence to mine and analyse vast quantities of Chinese language content held on the internet. Such multilingual capability would be an essential element of any global internet surveillance system, whether it be for the detection of emerging diseases or other potentially disruptive phenomena.

Building an AI Early Warning System for the Next Pandemic

Read more about our project creating a prototype of a platform to monitor the internet for the emergence of new diseases. Both parts of the e-book available now⬇️ 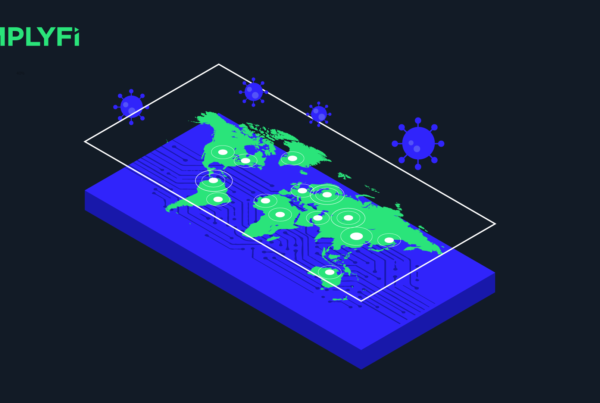 Building an AI Early Warning System for the Next Pandemic: Part One

AMPLYFI | AMPLYFI Insights, Current Affairs, Zoonotic Early Warning System | No Comments
In this e-book, the first of a two-part series, you will discover: AMPLYFI's UK Research and Innovation funded project proving the concept of an artificial intelligence-based early warning system to…

Building an AI Early Warning System for the Next Pandemic: Part Two

AMPLYFI | AMPLYFI Insights, Current Affairs, Zoonotic Early Warning System | No Comments
In this e-book, the second of a two-part series, you will discover: AMPLYFI's UK Research and Innovation funded project proving the concept of an artificial intelligence-based early warning system to…