Hiring and Culture: Finding Your Tribe and Keeping Them 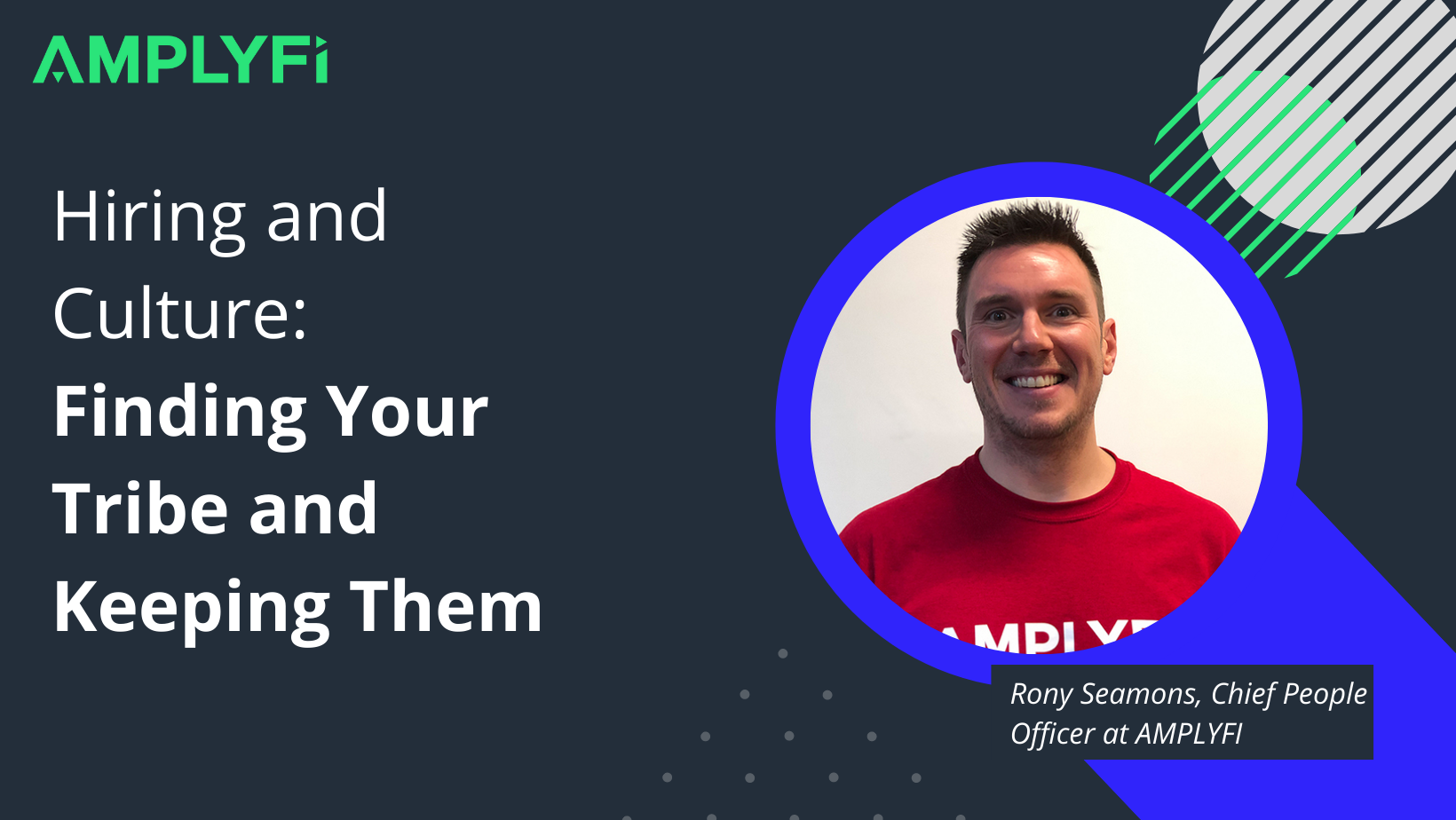 Culture is a company’s beating heart.

In an interview with Tech Nation, AMPLYFI’s Chief People Officer Rony Seamons, discusses the hiring processes that ensure your culture scales as the business does, and how to find the right people for your company. Read the full interview by Niamh Ollerton from Tech Nation here.

Rony says that the hiring process at AMPLYFI is intentionally tough, and he thinks this is the only way to set your stall out.

“We really value the fact that we have a high performing team. I think it’s important to start that process by making it difficult from the onset to get in, and by difficult I mean there’s a number of different stages to our interview process.

“You have an interview and then an in-depth discussion with myself and the hiring manager on skills and experience, so a deep dive into the CV and then we tend to have a task round, which is usually related to the job, something like software technical challenges if you’re going into the engineering team,” he says.

The hiring process could be described as high-pressure, with many prospective candidates opting out fairly early on in the application process when they realise how tough it actually is.

Rony says: “It’s good for them and good for us. And those who do get through, we know that they’ve got the gravitas and resilience that we need at AMPLYFI. This is one of the things in the process that we value, as we get the right people into the door.

“Another thing is, depending on which team somebody is coming in to, we involve the wider team as well. I think it’s really important to get that wider input. And I think it helps foster greater relationships between team members. Your peers and new team members will feel part of that hiring process, and I think that really fosters a great culture.”

Rony says transparency and honesty are two traits that are really cherished at AMPLYFI, and they deliberately look for it in interviews.

And although he admits that responses can have a bit of gloss – you’re in an interview after all – Rony says AMPLYFI values people who show a little bit of vulnerability.

“We love transparency coming through, so we look for that in candidate responses, especially when we probe and press hard. If we open the door for them to be honest and they still try to give us the gloss and shine, that’s not what we’re looking for,” he says.

Rony says the culture at AMPLYFI has grown organically.

“We haven’t intentionally documented what we feel our culture is, but it certainly has grown.

“What we’re really mindful of is we’re currently at around 50 employees. We’ve got ambitions to grow. We’re looking to double that within two or three years, and in that case, you need to document culture, you need that DNA almost codified so that the hiring managers as they get further and further away from the initial 50 can carry that culture with them and be confident that they’re going to hire people that fit the mould,” Rony says.

And he admits AMPLYFI is starting that process now, starting with the CEO and Rony himself, looking at what the traits and behaviours look like, and who the people within AMPLYFI are and what they stand for.

Rony says: “We started to list those, and then we came up with a list of promoter traits and behaviours. What will the promoting behaviours look like? And then what’s the opposite of that?

“We’re starting to document that and eventually we’re looking to create an AMPLYFI culture deck, and that would be fully visible, so that anyone coming into the company will understand who we are and what our culture looks like and feels like.”

The hiring process at AMPLYFI is quite rigorous and intense, something that Rony says the company doesn’t apologise for, as the multiple stages and expectations allow prospective candidates to determine whether or not the role and company is right for them, deselecting themselves out of the running if that’s what they want.

Rony says: “We’ve got to a stage now where we try to think quite far in advance.

“We publish a business plan every year which identifies what the jobs will be. When it comes to the stage where we need a software engineer or manager, then all you have to do is look at the business plan that we’ve signed off on and then we can either post the job or go to recruiters.

“Now and again, we do have a need that comes out of left field because someone comes up with a new project and it’s something we hadn’t banked on, so then we will advertise jobs on an ad hoc basis as well.

“One of the things that’s been a godsend to me and the people team is HiBob. There’s a lot of information sources within the platform which keeps me updated and brings in everyone else in the hiring process and keeps them informed of where we are in the process.”

KPIs and OKRs – are they relevant?

Some areas of the people function are subjective, meaning you can’t have OKRs around it. However, in reality, Rony says there are OKRs.

“The hiring cycle time for example, it perhaps did take us a bit too long historically to get somebody in the door, particularly if we used our own process and job boards.

“One of my OKRs reduced that down so now we’re aiming for a two-month lifecycle from the interview process to when they start. We’re aiming to make it a nice, efficient process.

“We also look at attrition rates as well. The HR platform provides us with those metrics. If your retention rate is going up, then you’re doing something right,” Rony says.

Starting with structure, Rony says it wasn’t quite so straightforward when he first joined AMPLYFI.

“We’ve all come from large organisations, and when you go from large to small you don’t want to have anything to do with corporate anymore.

“But actually, large organisations have efficient processes. So, depending on the function, we have focussed the hiring process, so no matter which function area is following the blueprint, we’re confident that we will find talent using that process,” Rony says.

He also says that AMPLYFI looks at its hiring process through the lens of diversity and inclusion. What is AMPLYFI doing to ensure its culture continues to have diversity that will be cherished?

Rony says: “In our job adverts, we’ve introduced a model that isn’t biassed to gender. We try to keep it as neutral as we can to make sure that they’re attracting both male and female candidates. We’re making a conscious effort to pave the way to ensure diversity and inclusion in our company, and we are so proud of the diversity we have in our community.”

“It’s a privilege to do it because you get to meet so many people that want to join the company. So I love that and I think some of that cascades to the hiring managers because it can be quite a daunting process, particularly if you’re a new line manager and haven’t hired before,” he says.

And Rony is particularly proud of AMPLYFI’s retention rate – especially during a time of truly competitive hiring and job searches from candidates.

He adds: “Everyone is suffering attrition right now in any sector because all of a sudden, if you’re in the tech world, you can work for any company, so that’s given people the opportunity to choose from a number of companies.

“We’re really proud of the retention that we’ve got right now. We’ve not lost people during this difficult period, and we’re also finding new talent as well.”

Transitioning to Head of People

As with most startups, Rony admits his role was quite generalist at the beginning.

“You don’t have a job description. You do whatever you need to do. When you get to maturity in a business where you’re looking to scale, you then need to specialise a bit more. So then the business needs to decide that it needs people in the rising team that are passionate about what they do, but also have a deep understanding of that functional area.

“The people function is something that I’ve loved for about 20 years now in different management roles. For me it was a lovely transition to then have just the people side of the business to focus on, allowing me to have that vision.”