The role of Nuclear Energy in the Global Water Sustainability Crisis 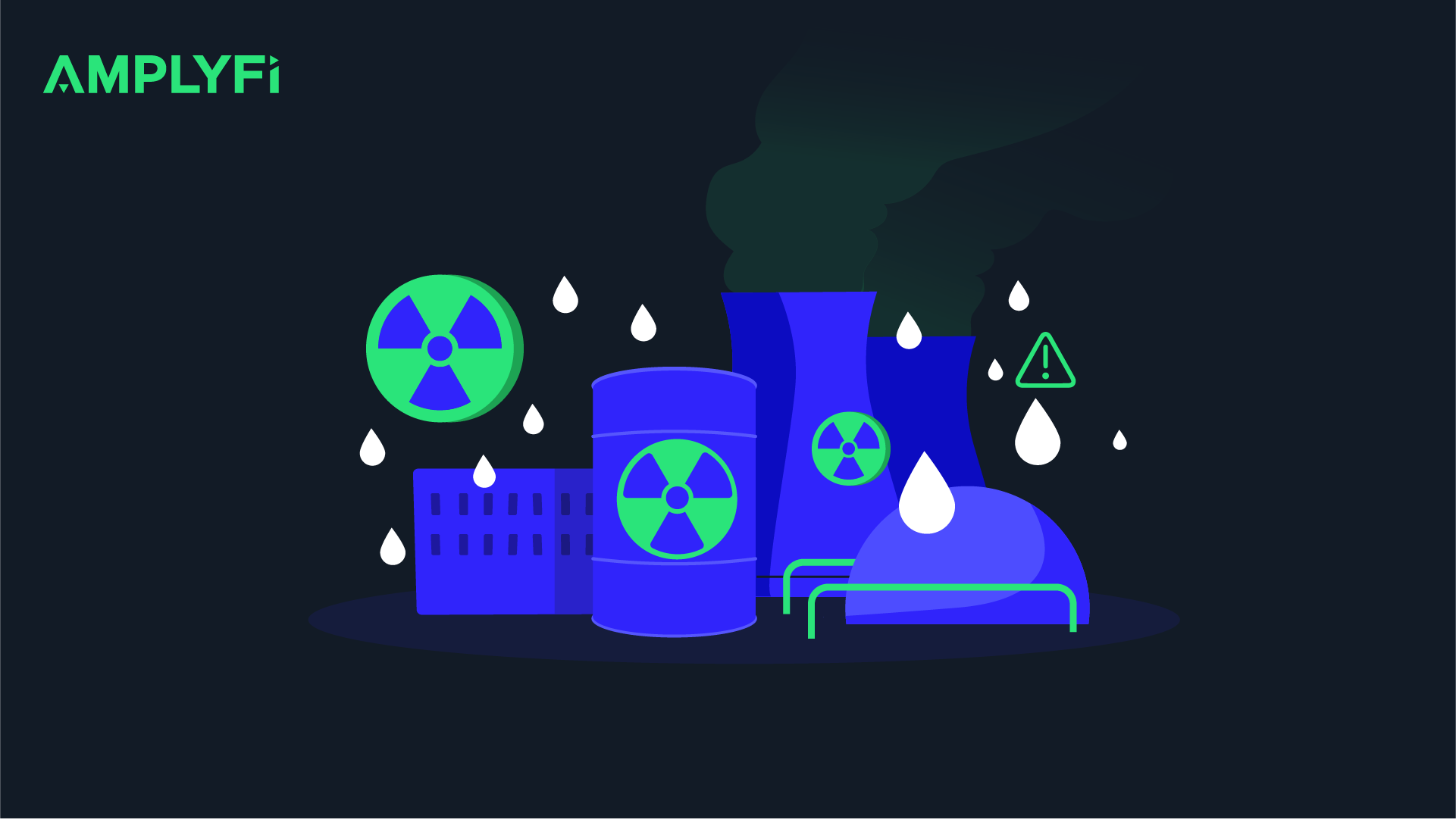 The climate crisis is upon us and even the most staunchly prepared are predicting disruption to every facet of our lives. Water, a pillar of life on earth, cannot escape the erosion to its sustainable balance. Here we collect a series of insights designed to illuminate the breadth and depth of the water sustainability crisis and highlight the disruptions that will drive change worldwide. Previously in this series, we have explored water-based conflict in the context of the global water crisis, and how the COVID-19 pandemic has affected sanitation and water sustainability. Here, we examine nuclear energy in the context of climate change and water sustainability.

Using AMPLYFI’s AI-driven insights platform, we have analysed documents from the Deep Web and found several concerning factors related to the water sustainability crisis. The below word cloud indicates the most significant topics within the water crisis found by AMPLYFI’s platform.

Our analysis also shows that in the period from 2010 to 2018, the global dialogue around water crisis-related topics had both broadened in terms of geographic coverage and deepened in terms of intensity. In this time, many nuclear-related incidents also occurred. The Fukushima nuclear accident in Japan in 2011, for example, was caused by a tsunami disrupting the supply of cooling water to the site causing the reactors to overheat. 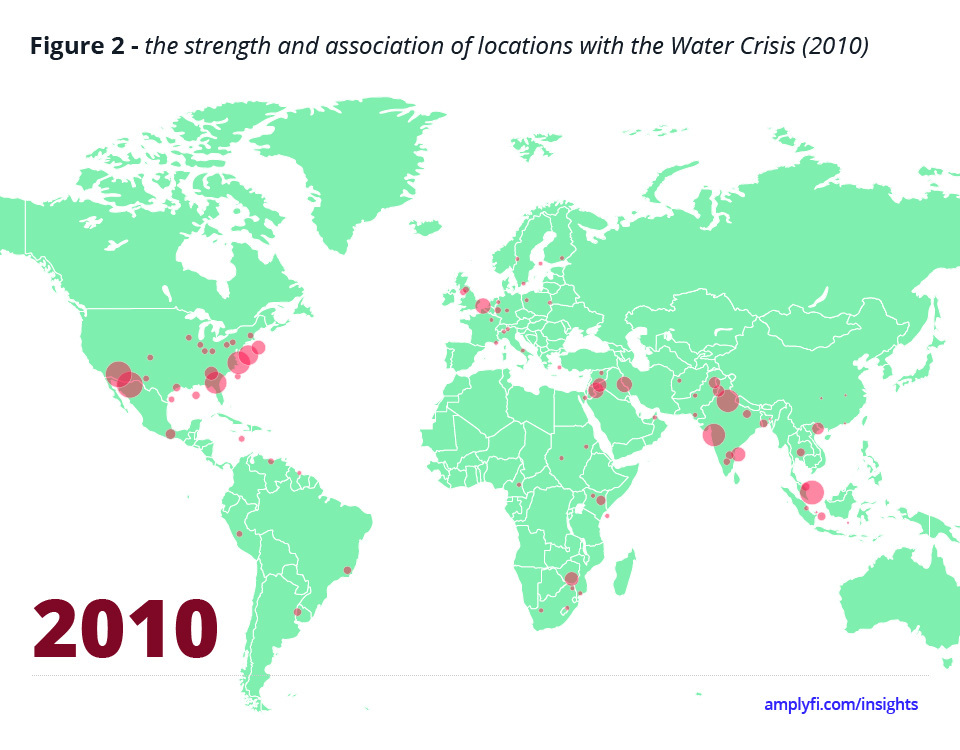 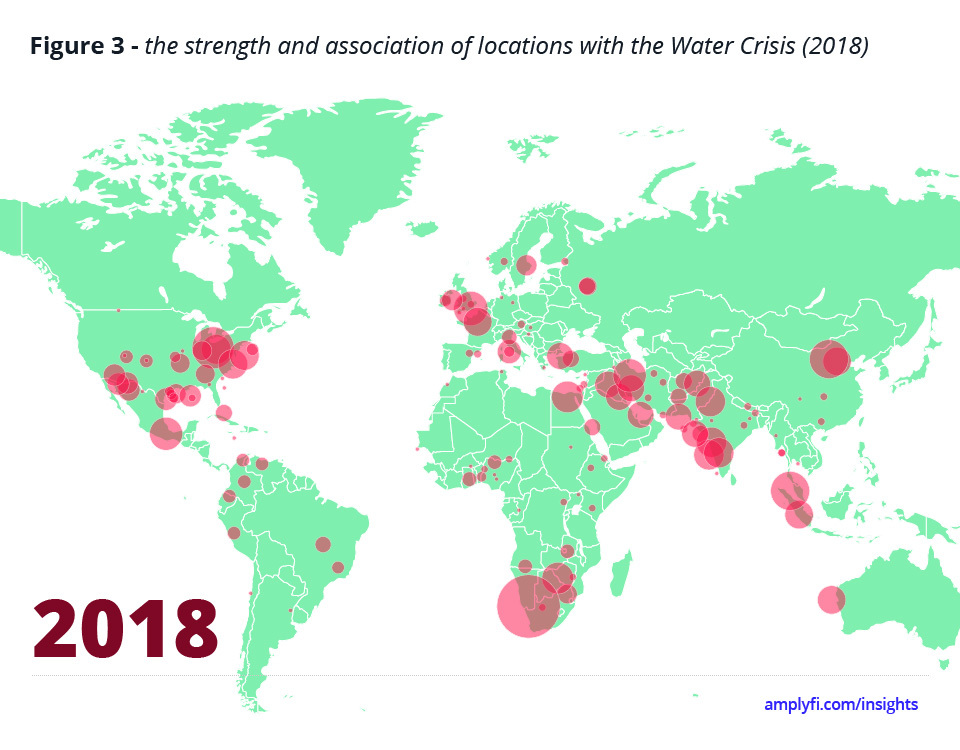 The primary use of nuclear energy is for generating electricity. Water is used in nuclear energy production in three ways; extracting and processing uranium fuel, producing electricity (involving the extensive activity of boiling water to generate steam and using water for waste heat rejection) and controlling wastes and risks.

Like other core policy issues, nuclear energy’s role in the water crisis and topics like decarbonisation is complicated. It involves layers of issues, including but not limited to; the risk of water stress for power production, water pollution caused by nuclear power plants, the opportunity cost of building and sustaining nuclear energy plants and the role of nuclear energy in achieving decarbonisation targets. Another key issue lies within the consideration of nuclear energy and renewables, such as solar power and wind-based energy, as mutually exclusive solutions to meet emissions reduction goals and tackle the climate crisis.

Nuclear energy has a role in catalysing the water crisis. However, it is also known for being the second-largest source of low-carbon electricity in the world behind hydropower, as recognised by the US government’s Office of Nuclear Energy. The International Atomic Energy Agency states that nuclear energy has a game-changing power to curtail greenhouse gas emissions. Globally, 440 nuclear power reactors produce 30% of all low carbon electricity. This has prompted many countries across the globe to keep nuclear energy as an important part of their energy mix, despite the massive costs and time needed to build these plants.

Japan is the world’s third-biggest economy and fifth highest emitter of greenhouse gases. The country committed last year to become carbon neutral by 2050. However, Japan’s carbon neutrality goal faces a dilemma, whether to produce more nuclear energy or more renewables. The country relies on both as its basic energy plan aims to produce 22-24% of its energy from renewables and 20-22% from nuclear power by 2030.

Japan’s energy minister declared that nuclear energy is critical to hit net zero emissions by 2050. On the contrary, Germany is set to phase out its nuclear power plants by 2022, a decision made by the country in 2011. Despite a divergent course of action to curtail carbon dioxide emissions, both countries face climate-related issues of receding groundwater, lower precipitation levels, and rising water temperatures. Germany’s four important water sources – the historic Rhine River, Danube River, Elbe River and Lake Constance have experienced record lows caused by the arid climate.

One-fifth of the global population faces a high baseline water stress, including the Middle East and North Africa. The World Bank declared the latter as a global hotspot of unsustainable water use on Earth. Tokyo, found to be the most water-stressed city globally, is among the capitals of 17 countries facing extreme water stress conditions.

Even countries with low-medium water stress, such as the US, have certain states with extreme water stress. A recent study revealed that 61.8% or a combined 535 GW of operating capacity in the US fossil fuel and nuclear power plants face medium-high to extremely-high water stress in 2030.

This change is evident in Japan’s annual temperatures, which have risen faster than the global average. 2021 saw Japan’s earliest cherry blossom season on record since 812, likely due to climate change. Nuclear power plants need large amounts of water for cooling. Still, Japan and areas of the Mediterranean face heating up of their seas and oceans. Sweden, Finland and South Korea have had to face temporary closure of their nuclear power plants due to seawater being too warm.

At 161 billion gallons a day, the US nuclear and fossil fuel plants already consume 45% of the country’s freshwater usage. Although nuclear power generation emits a lower level of carbon dioxide emissions than other methods, it also impacts limited freshwater supplies in ways yet to be thoroughly researched. As discussed earlier, the same water temperature, so very crucial in nuclear power plant operations, is rising due to climate-induced changes.

A high opportunity cost is associated with building nuclear power plants. Economic planning not only factors in the carbon footprint, but also the time and cost it takes to start delivering the promised results. Between 1981 and 2019, the average construction time of nuclear power plants was between 7 and 9.7 years, with the longest taking 10 years.

SMRs or Small and Medium Reactors (units ranging from 225 down to 45 MWe) that use less water for cooling and need less commissioning time may prove to be a better alternative to the traditional time and cost-intensive nuclear power reactors. However, examples of SMRs meeting the energy demand are far and few. Russia started a 70MW floating nuclear power plant in 2019, which sailed 3,000 miles from the Arctic port of Murmansk to Chukotka in the far east. Other countries, including China, Canada and France, are also starting to commission SMRs.

There’s also hope in the form of emerging technologies, such as high-temperature gas-cooled nuclear reactors (Generation IV). These reactors could support co-generation and tri-generation plant configurations that enable multiple products to be created, namely power, hydrogen, and desalination. Though at a smaller scale than traditional nuclear power plants, storage of radioactive waste and water contamination remains core issues associated with SMRs. The technology is still in the early development phase. NuScale, an SMR development firm, announced in August 2020 that its first SMR design was approved by the US Nuclear Regulatory Commission, indicating the fact that there is still time to realise safety benefits of new technologies in the nuclear energy sector.

There are also prohibitive aspects of nuclear power. Despite countries such as France and Japan keeping nuclear as a significant part of their energy mix to hit their 2050 emissions targets, experts argue that the time and cost it takes to build nuclear power plants make it a ‘prohibitive technology’. In America alone, more than half of the nuclear power plants are losing money, with losses totalling about US$2.9 billion a year.

Another aspect closely related to nuclear energy generation is its impact on energy security. A Fukushima-like incident can have a disproportionate effect on a country’s energy supply chain. Thus, any long term policy should incorporate measures to deal with voluntary but abrupt scaling down of nuclear energy generation by the government of the respective country, should there be a Fukushima-like incident in future.