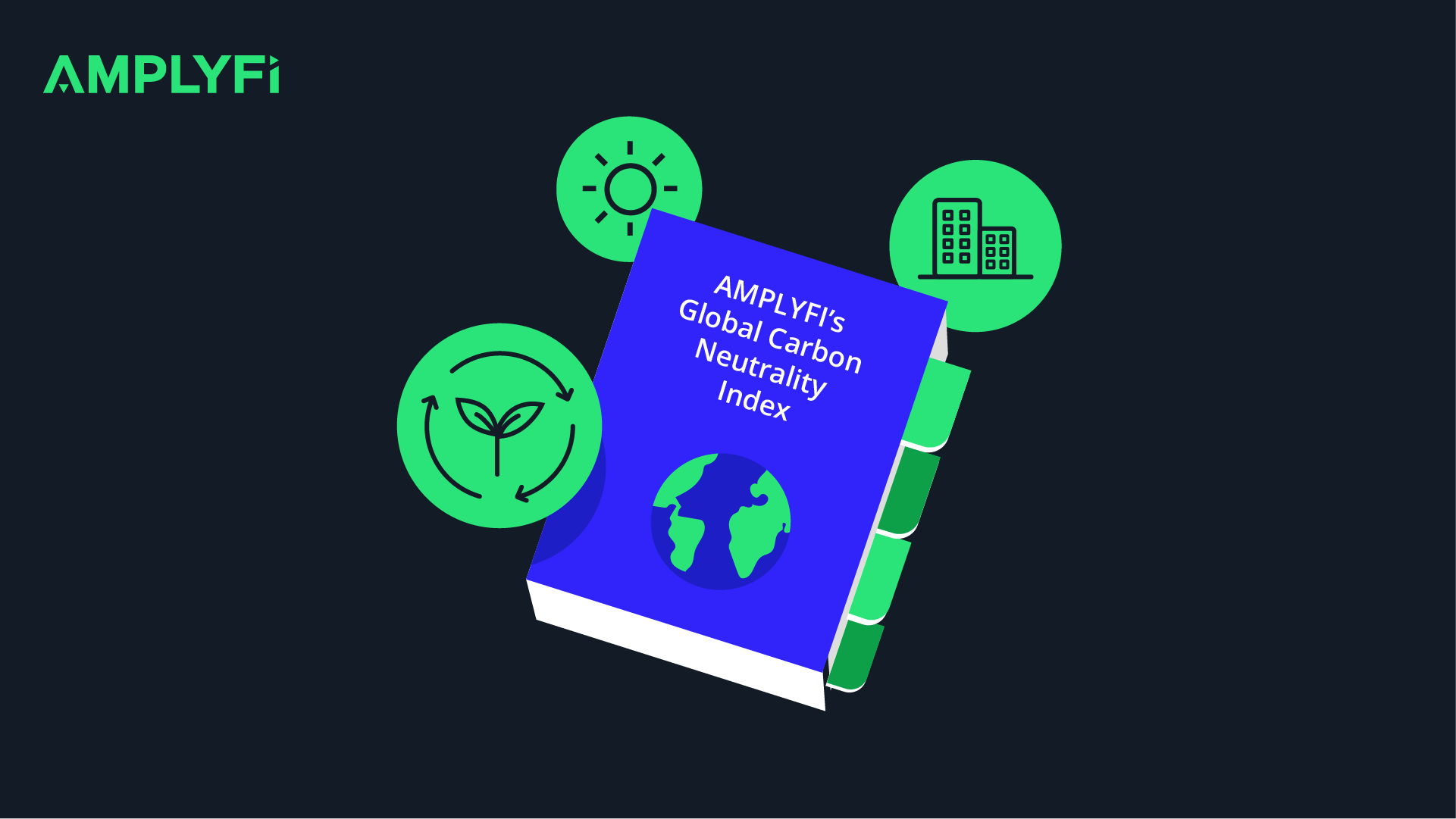 Climate change is one of the biggest threats facing our planet and, whether an individual, commercial enterprise, institution, or government, we all share a collective responsibility to first reduce and ultimately neutralise our greenhouse gas emissions (measured in carbon dioxide equivalents or CO2-eq).

The 2015 Paris Agreement established a multilateral goal of 190 countries to limit the increase in the global average temperature to well below 2°C above pre-industrial levels. In recognising that developing nations will inevitably see an increase in their emissions, achieving this target places a burden on developed nations to at least achieve zero emissions (with negative emissions a possibility under some scenarios). Since then, countries and regions have unveiled their roadmaps towards carbon neutrality. In June 2019, the UK became the first major economy to pass a net zero emission law. It commits the nation to bringing all Greenhouse Gas (GHG) emissions to net zero by 2050. In April 2021, it passed a new law to reduce emissions by 78% by 2035. China, under the leadership of President Xi Jinping, has plans to achieve neutrality by 2060 with clean energy among their priorities. President Moon Jae-in of South Korea indicated his country’s target is to achieve neutrality by 2050 with its Green New Deal focusing on renewable energy, green infrastructure, and the industrial sector. To date, South Africa is the only African nation to set a target of achieving carbon neutrality by 2050.

Similarly, the European Union (EU) has a climate neutrality objective by 2050 articulated in its Green New deal. It also has a circular economy action plan focused on sectors that consume resources with a large opportunity for “circularity” such as packaging, batteries, plastics, electronics, textiles, construction and foodstuffs. One of President Biden’s first acts on coming to power was to commit to returning the USA to the Paris Climate Accord. On 22nd April 2021, he announced that the USA would cut carbon emissions by 50-52% below its 2005 levels.

The rise of climate change on political agendas and in the public conscience has created inertia that is increasingly shaping business and investment strategies. Schemes such as the EU Emission Trading Scheme and California’s Cap and Trade Program have introduced financial penalties for non-compliance. Consumers are increasingly looking to purchase “green” or sustainable goods. As a consequence, companies globally are increasingly making very public commitments to reduce their greenhouse gas emissions. Some have elected to work and gain recognition under one or multiple climate target schemes such as the Science-Based Targets Initiatives (SBTi) and RE100 whilst, in recent years, a number of corporates have announced commitments to becoming carbon neutral across their operations; essentially creating a race to net zero. For instance, Google advertises itself as having been carbon neutral since 2007. Ikea has announced its intention to become net zero carbon by 2030, British Telecom (BT) by 2045, and British Airways (BA) and British Petroleum (BP) by 2050.

Tackling climate change is very much a mainstay of the broader Environmental, Social, and Governance (ESG) performance metrics that are increasingly informing investment strategies. Monitoring ESG performance has become central to assessing the operations of a business, bringing a sharp focus to its corporate culture as well as the environmental and social impact of its activities. ESG data integration is becoming increasingly prevalent at asset managers. In 2020, global capital markets management consultancy Opimas reported that the global value of assets under management (AUM) at investment funds leveraging ESG data had increased significantly, rising from US$22.9 trillion in 2016 to over US$40 trillion in 2020, a trajectory it expects to continue.

However, whilst ESG ratings have become increasingly influential, they face limitations. For example, data is often unverified and dependent on a company’s own self-assessment which may be subjective or potentially incorrect. About 70% of ESG data is collected from surveys adopting a ‘tick the box’ format asking companies if they have in place relevant policies without quantifying their implementation or progress. They are often biased towards reflecting a company’s policies, procedures, and aspirations rather than its actual delivery, performance and operations activities.

To help offset the limitations of traditional ESG data, AMPLYFI’s Global Carbon Neutral Index delivers a new, unbiased, and statistically quantified performance metric for assessing and benchmarking an organisation’s performance. Our AI-driven insights platform uses unsupervised machine learning to mine and analyse vast quantities of open-source content directly relating to topics surrounding the global net zero carbon discourse. In doing so, it identifies organisations that are mentioned throughout the dialogue and statistically quantifies how strongly they have been and are associated with core topics such as Carbon Neutrality, Net-Zero Carbon Emissions, and Net-Zero Target over time.

The advantages of this approach are that it is objective, not reliant on a company’s self disclosure, not dependent on surveys being issued, completed, and returned, utilises a repeatedly consistent methodology, and is regularly updated as opposed to waiting for annual reports and annual sustainability statements to be published.

The intent of AMPLYFI’s Global Carbon Neutral Index is to provide investors and asset managers with a new metric that, when used alongside traditional ESG data, enables them to triangulate the performance of a company for a more complete and accurate picture. It also allows the companies themselves to benchmark against their peers and for analysts to compare performance across sectors and against a central global index.

Analysing the Global Carbon Neutral Index trend over the past decade, it is clear that the COVID-19 has failed to dampen the debate about climate change. The constant increase since 2018 is also completely consistent with the raft of announcements at both national and enterprise levels concerning setting zero carbon ambitions and targets.

The index currently covers over 4,000 entities globally. In the example below, we compare the performance of the top ten ranking companies on carbon neutrality across the energy, aerospace, aviation, and automotive sectors.

According to International Energy Agency data, the energy and transportation sectors have jointly contributed to around 70% of total global CO2 emissions since 1990. With the energy sector being the most heavily polluting at around 45% of global CO2 emissions since 1990 and having been an early priority for carbon markets and emission standards’ legislation, it is perhaps not surprising to see companies in that sector outperforming those in others.

The 2020 ratings in AMPLYFI’s Carbon Neutrality Index demonstrate that energy is performing significantly higher than other sectors. The top performer in this sector is BP which ranked first with a rating of 1,712 compared to the other three sectors where the top performers achieved significantly lower ratings of 547 (Aviation), 434 (Automotive) and 390 (Aerospace).

This is primarily due to the energy sector having participated in carbon markets for longer than the aerospace and automotive sectors and, therefore, have been under direct pressure to act for longer. Consequently, the sector is ahead of the curve with regard to carbon abatement and emission reduction compliance. In addition, those in the fossil fuel extractive segment of the sector, the combustion of whose primary energy products are the major cause of carbon emissions, have the strongest incentive to transform themselves and develop solutions such as carbon capture and storage, and promoting the hydrogen economy in order to remain relevant. BP and Shell have been particularly vocal about their carbon neutrality aspirations and the need for them to embrace the energy transition.

Within the transportation sector, the major source of emissions is “tailpipe” emissions at the point of use in road transport. Ford and Volkswagen are the frontrunners in the automotive sector with ratings of 434 and 337 respectively. In 2015, the U.S. Environmental Protection Agency (EPA) flagged Volkswagen as selling diesel cars with software that cheated emissions tests, pressure from this scandal has put the spotlight on them and forced companywide action, likely contributing to their current high performance. Although car manufacturers have received significant adverse media surrounding “dieselgate” this is in relation to emissions (primarily NOx) that impact air quality rather than directly cause climate change. The challenge for policy makers and regulators in decarbonising transportation has been how to do so without directly taxing or penalising end users (or “the voting public”). To date, action to reduce emissions has primarily been through standards to improve efficiency, policies to increase the share of biofuels in the energy mix, and subsidies for the purchase of lower and zero emission vehicles such as electric and hydrogen vehicles. From AMPLYFI’s index ratings, none of the low-volume luxury or high-performance specialist manufacturers appear in the top ten. At 13 with an index score of 91, Rolls Royce is the highest ranked.

This sector essentially consists of manufacturers of spacecraft and aircraft and their components, and operators such as airlines and charter companies. The Aerospace element of the sector industry is the lowest performing in the carbon neutrality index with its highest performer, Boeing, achieving a rating of 390 and Northrop Grumman at number ten with a rating of just 17.

The “operator” element of the sector sees BA top the ranking with a rating of 547 followed by its owner, the International Airlines Group (IAG) with a rating of 347. This demonstrates the ability of the index to bring transparency to performance within large groups and conglomerates. Decarbonisation of aviation has proven challenging with difficulty in assigning liabilities to journeys that span multiple jurisdictions, some with stringent emissions policies, others without.

The industry was added to the EU’s emission trading system (ETS) in 2012 initially covering all flights to and from EU airports. Significant international and industry pressure subsequently reduced this to intra-EU flights only. The International Civil Aviation Organisation (ICAO), the United Nations agency that regulates aviation, has yet to announce firm international measures or standards.

The burden of reducing GHG emissions has been shared by both the aircraft manufacturers and airlines. Action towards carbon neutrality in this industry broadly falls into activities such as airframe and engine design to improve efficiency, the introduction of biofuels to displace fossil fuels, and the development of electric and hydrogen-powered aircraft and drones.

The Global Carbon Neutrality Index is produced using AMPLYFI’s proprietary Insights Automation Platform. The platform covers a wide-range of companies from start-ups, SMEs and large corporations and multinationals including the FTSE 100 and 500 companies. In future publications, we will be sharing indices for other elements of ESG and performance in innovation.

A selection of our latest insights, news and product updates.