Why should investors care about the Sustainable Development Goals? 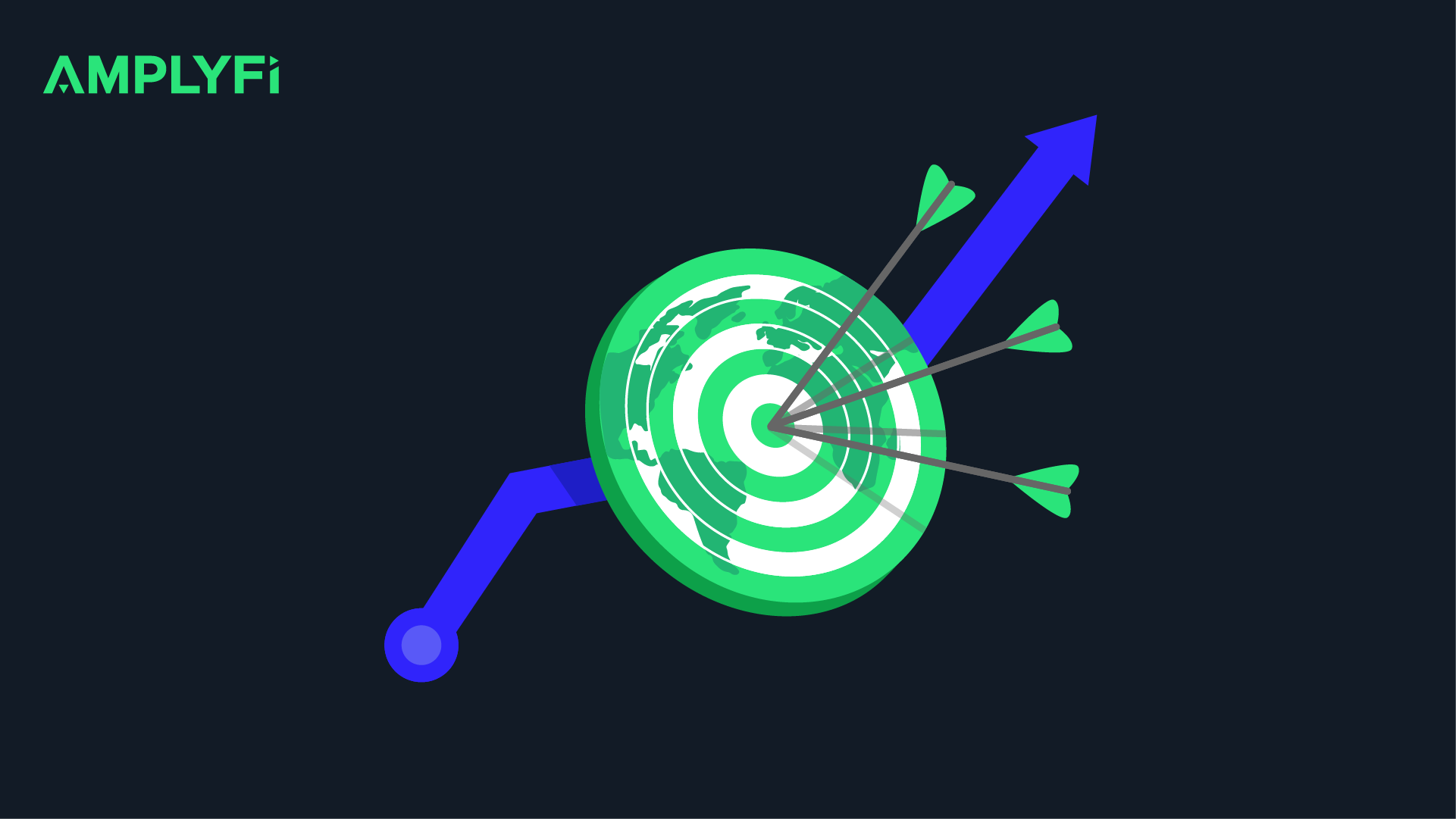 The Sustainable Development Goals (SDGs), set out by the United Nations, were adopted in 2015 by 193 countries as a follow-up to the Millennium Development Goals. Set to be achieved by 2030, they outline 17 themes and 169 targets centered on delivering prosperity for all by addressing structural poverty and climate change through the collaboration of communities, governments, civil society organisations, and corporations.

Investment into sustainable development, particularly a rising focus on Environmental, Social, and Corporate Governance (ESG), is increasingly seen as the most viable path to generating profit. At the heart of ESG investing is an evidence-based conviction that investments into companies with sustainable production operations and high regard for their workforce, particularly diversity, are more profitable than into those without.

In our previous article, we used AMPLYFI’s AI-driven insights platform to uncover unique insights into ESG investing. In analysing unstructured data, our technology read thousands of documents relating to ESG investing, quantified the most significant topics of discussion, and generated a comprehensive view of the ESG landscape.

In deepening this analysis, we overlaid the results generated by our original ESG analysis and those of our new analysis on SDGs and observed considerable alignment. For instance, Energy Transition, Climate Change, and Carbon are the top ESG themes which are supportive of the switch from the consumption of fossil fuels to zero-carbon energy sources. As indicated in the diagram below, energy transition relates to SDG 12 “Responsible Consumption and Production” whose targets include, among others, the sustainable management and use of natural resources. Both the carbon and energy transition elements of ESG align strongly with SDG 7 “Affordable and Clean Energy” whose targets include increasing use of renewable energy and expanding infrastructure for the supply of and access to sustainable energy. 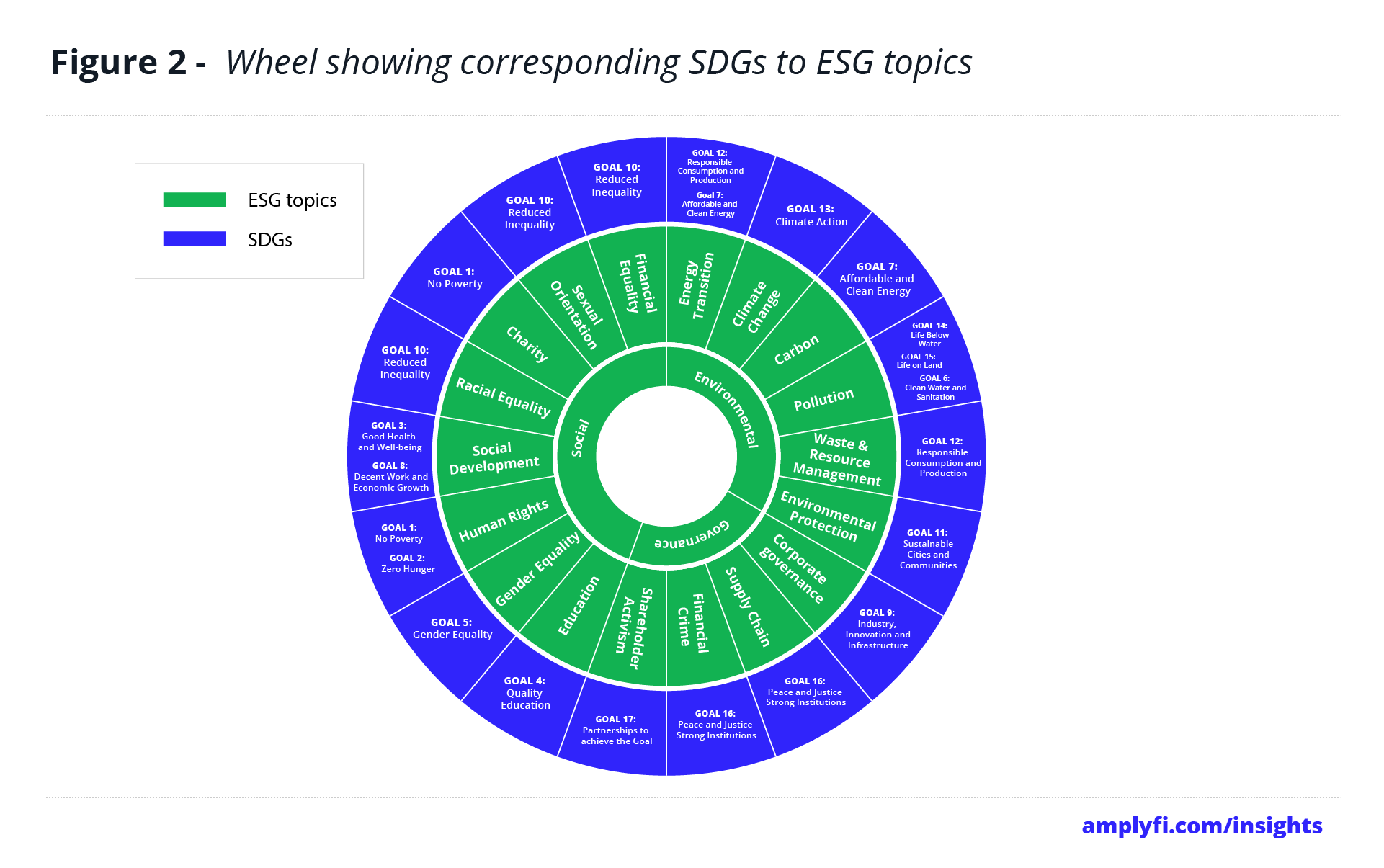 Most of the 193 countries that adopted the SDGs have already made significant policy shifts to align themselves with at least some of the 17 Goals. Although aspirational and not legally binding, to help achieve the SDG goals, some countries have voluntarily adopted binding international protocols and treaties that affect national policies and laws on the environment, conservation, and climate change.

Even though some of the conventions pre-date the SDGs, such as those set out by the Kyoto Protocol and the Stockholm Convention on Persistent Organic Pollutants, it demonstrates a growing global commitment across nations to address elements such as climate change and sustainability. As such, the essence of the SDG goals are increasingly being baked into the fabric of policy intent globally to the extent that it is rapidly becoming an enduring influence on shaping decision making across the political, social, public, private, and industrial arenas. Increasingly, the overarching driver for investors to align with the SDGs is that these are increasingly foreshadowing national policies. Our analysis indicates that whilst there is alignment between the current key themes of ESG investing and the SDG goals, it is not yet complete and some gaps still exist. These gaps effectively translate into investment opportunities that have yet to be leveraged.

As the SDGs increasingly influence and are reflected in policy decisions, they will indirectly start to shape and define the criteria and boundaries for building and conducting successful business – a fundamental investor interest. Going forward, the most successful companies will be those that proactively align their strategies, operations, and products with the SDG themes. Conversely, companies that ignore or knowingly mislead the public by greenwashing their activities will increasingly expose themselves to operational, regulatory, and reputational risks.

Estimates of the cost of financing the SDGs vary but broadly fall into a range of US$5–7 trillion to finance all the SDGs. Current funding levels are considerably short of the levels required. This is despite the fact that UN data shows that SDG market opportunities could potentially generate at least US$12 trillion in revenue and create over 380 million jobs. It is estimated that mobilising just 7.76% of the global Assets Under Management annually could finance the SDGs and, with the goals increasingly influencing government policy globally, the returns for investors, particularly those that move earliest, will only increase.

At present, corporate reporting on the SDG performance is sporadic and voluntary. In February 2018, a report by KPMG indicated that 40% of the world’s largest companies “acknowledged” SDGs in their corporate reporting. A similar survey by the World Business Council for Sustainable Development and Det Norske Veritas found that 82% of the G250 companies report on some aspects of the SDGs and very few report on all 17 goals. A recent report by S&P Global’s Trucost reviewed industry surveys and revealed that SDG 3 “Good Health and Well-Being”, SDG 8 “Decent Work and Economic Growth”, SDG 12 “Responsible Consumption and Production”, and SDG 13 “Climate Action” were the most heavily prioritised goals. Furthermore, the report defined SDG risk as “the risk that a company may be directly or indirectly causing a negative impact on the SDGs (such as greenhouse gas emissions in the supply chain) or the risk that a company may be dependent on practices and activities that conflict with the SDGs (such as underpayment of wages or child labor)”. This highlights the growing  importance of corporate awareness on SDG risk factors and their potential impact on profitability and business continuity.

Whilst it is not legally binding to set and achieve ESG targets and objectives, an increasing number of governments are making reporting ESG performance mandatory. In the United Kingdom, European Union, United States, China, Singapore, and India, some level of ESG reporting is a legal requirement. In places such as South Africa, Japan, Germany, Arabian Gulf, Netherlands, Russia, Switzerland, and France, ESG reporting is encouraged and may soon be legally required.

Whilst it is likely that SDG reporting mandates will emerge to become mainstream, strengthening and perhaps even replacing ESG reporting might be needed to enable corporate performance to be benchmarked on a consistent basis. This would then enable organisations to communicate concisely on their activities and track progress made towards the realisation of SDGs. However, there will need to be a coordinated global effort to agree common reporting principles, guidelines, and practices.

So, should investors care about SDGs in the way that they do about ESG performance? Arguably, they are two sides of the same coin. In order to achieve the UN SDGs it is the responsibility of governments to create the policies and regulations to encourage change. Therefore they are increasingly a lead indicator of the likely policy positions of countries going forward. ESG drivers on the other hand have largely evolved through the actions of corporations as influenced by investor preferences, public opinions, and consumer choices. At present, the SDGs are articulating the end goal whilst ESG is creating a paradigm for companies to essentially self-regulate. As our analysis indicates, at present, both movements are aligned on several themes. This is largely down to the  investor, consumer, and public opinions that drive ESG being aligned with elements of the SDGs. Going forward, as tastes, preferences, and fashions inevitably change, governments will need to be proactive in ensuring that their policy and regulatory choices are ahead of the curve in ensuring that those elements that are currently aligned remain so and those that currently not are brought into alignment.