Part 2: The Tone of Discussion is shifting from Female Participation to Female Leadership 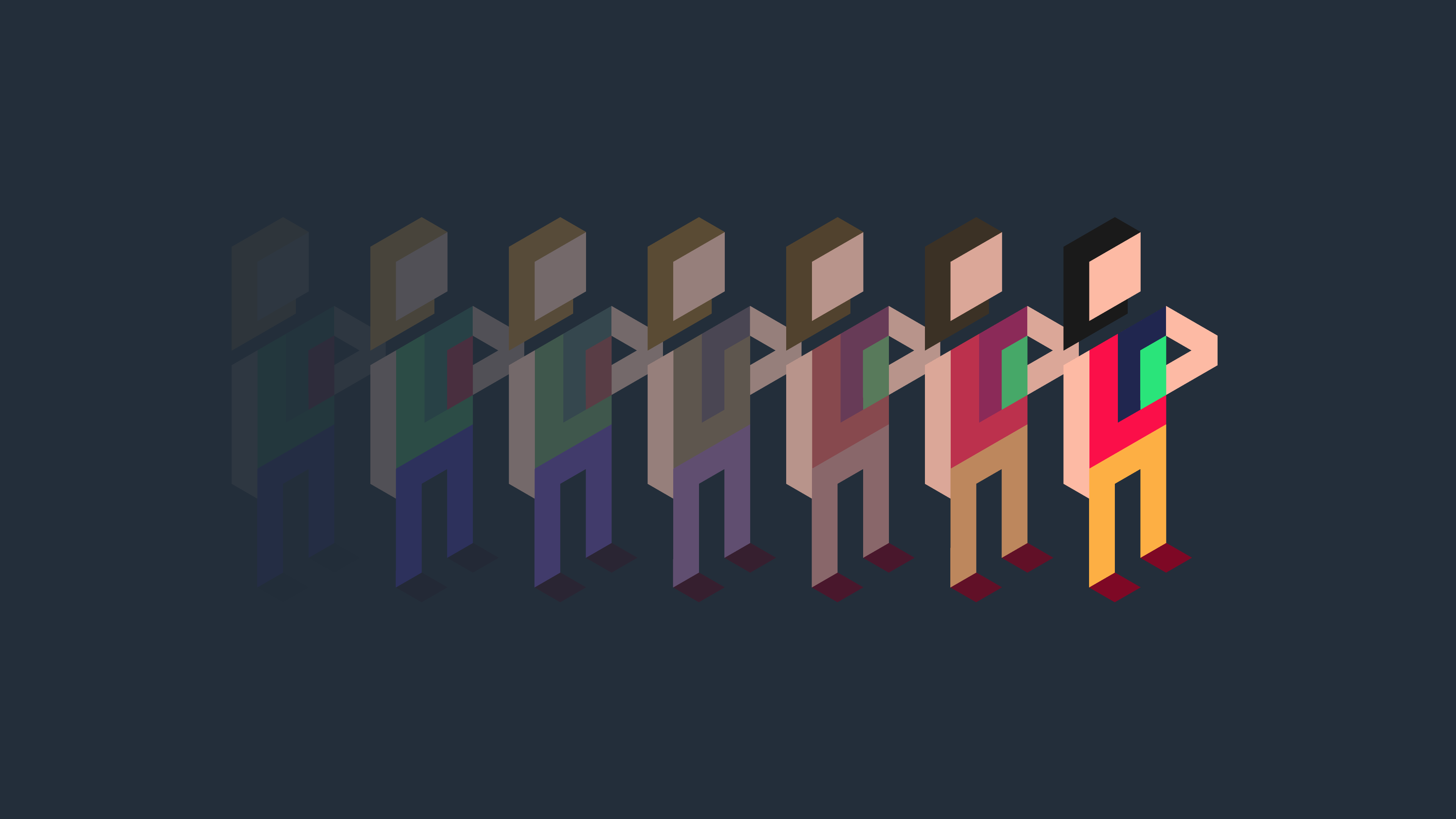 The second part of this three-part series on Female Entrepreneurship will focus on the tone of discussion and the language that authors use when referencing female entrepreneurs. In part one of this study, we were able to highlight an increase in the volume of discussion surrounding female entrepreneurship. Although this is positive news, we wanted to take our analysis one-step further and explore the context behind the increased volume. AMPLYFI’s advanced AI technology allowed us to identify trends in the language surrounding female entrepreneurs and businesswomen across many thousands of documents found in the surface and deep web (see Figure 1 for details on this process). In this article, we will discuss one of these trends, the swing in significance from Female Participation to Female Leadership over the last five years.

‘Female Participation’ and ‘Female Leadership’ were both recognised as high-level themes in our analysis, which means that we can group a number of individual topics under each. In Figure 2, we have displayed some of the topics that make up these themes and given a measure as to how the significance of these topics has evolved between 2015 and 2019. 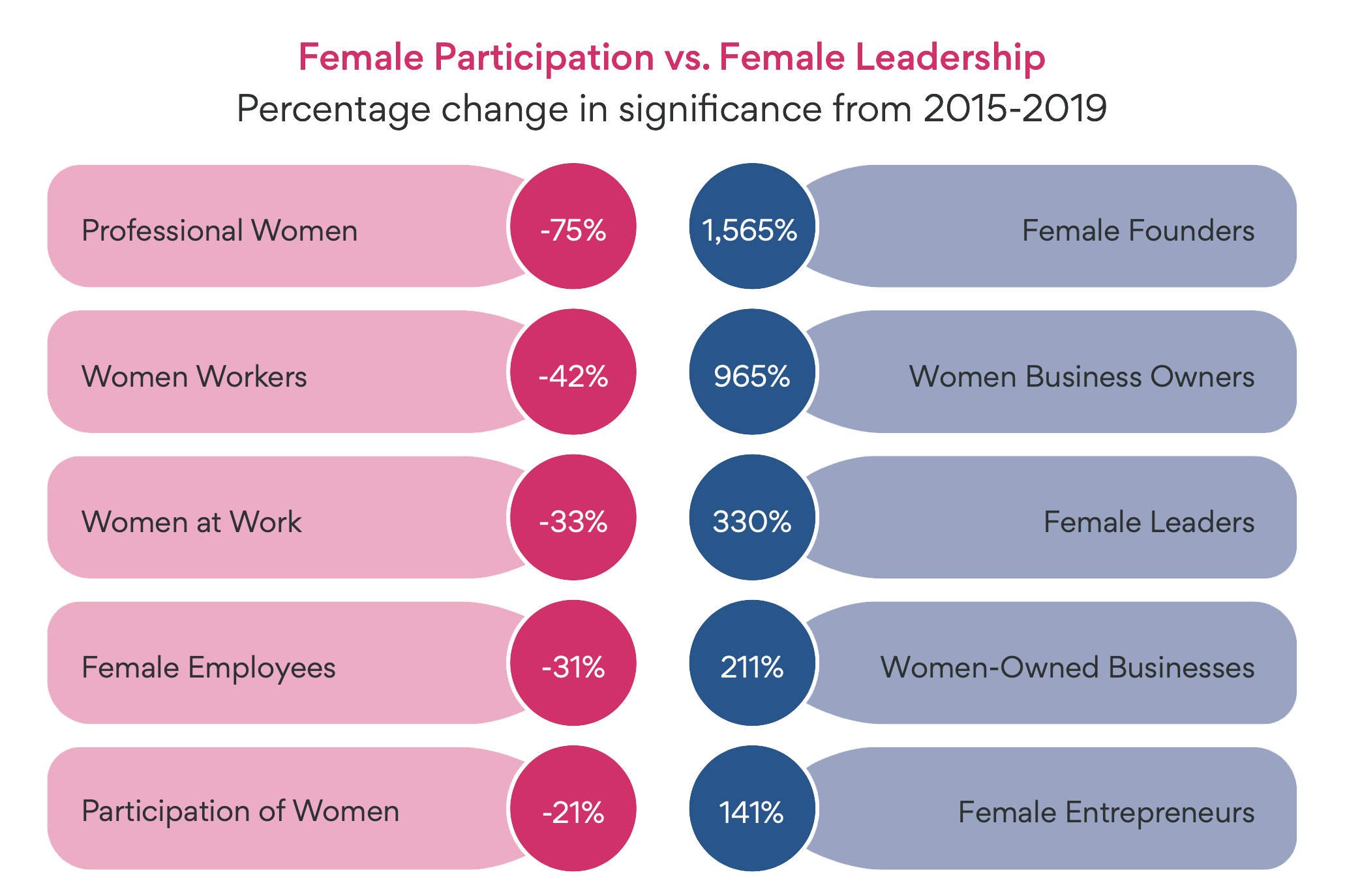 ‘Female Participation’ topics centre around women being present in the workforce but not necessarily in a senior or leadership capacity. Phrases such as ‘Women at Work’ and ‘Female Employees’ fit into this category. Our algorithms are also able to calculate the significance of a topic at a given time. We can see that the significance of topics related to ‘Female Participation’ (left-hand-side of Figure 2) have decreased from 2015 to 2019. The calculation for significance draws on several factors, including the probability of a topic appearing in the text, the way it is referenced in the text and its connection to other topics within this document and others in the study. The biggest individual decreases in significance were for the topics ‘Professional Women’ and ‘Women Workers’, which fell by 75% and 42% respectively.

In Comparison, we have witnessed large increases in significance for topics relating to the theme of ‘Female Leadership’ (right-hand-side of Figure 2). The topic ‘Female Founders’ has become something of a buzz word with a 15-fold increase in significance since 2015, alongside a 10-fold increase in significance for ‘Women Business Owners’. Our analysis has also highlighted Debbie Wosskow and Sam Smith as two leading role models who are often linked to this theme. Debbie Wosskow is the former CEO of Love Home Swap and co-founder of Allbright, while Sam Smith is the founder of FinnCap, a major investment bank and stockbroker.

We are beginning to quantify and measure the shifting of a society-wide narrative away from the concept of ‘Female Employees’ and ‘Women at Work’ and towards ‘Female Leaders’ and ‘Female Entrepreneurs’. This shift in focus could accelerate the dispelling of falsehoods about women’s ability to lead. However, questions remain over the potential effects resulting from less focus and discussion concerning ‘Female Participation’.

This societal change can also be evidenced by the growing number of female board members within FTSE 350 companies. The 30% Club, an organisation working for gender balance at corporate board level, released stats in late 2019 that showed the number of women on FTSE 350 boards had breached the 30% mark for the first time. In 2010 when the organisation was first formed, the proportion of female board members was below 10%. High-profile women holding CEO positions in FTSE companies include Emma Walmsley (GlaxoSmithKline), Alison Rose (NatWest), and Carolyn McCall (ITV plc).

By combining AMPLYFI’s analysis of soft signals held within unstructured textual data with the hard statistics published by The 30% Club, a unique level of insight can be reached. If the number of women on FTSE 350 boards continues to grow, it is highly likely that the language surrounding female entrepreneurs and businesswomen will continue to evolve. By monitoring and analysing this shift, it will be possible to predict the growth of female board members in the future.