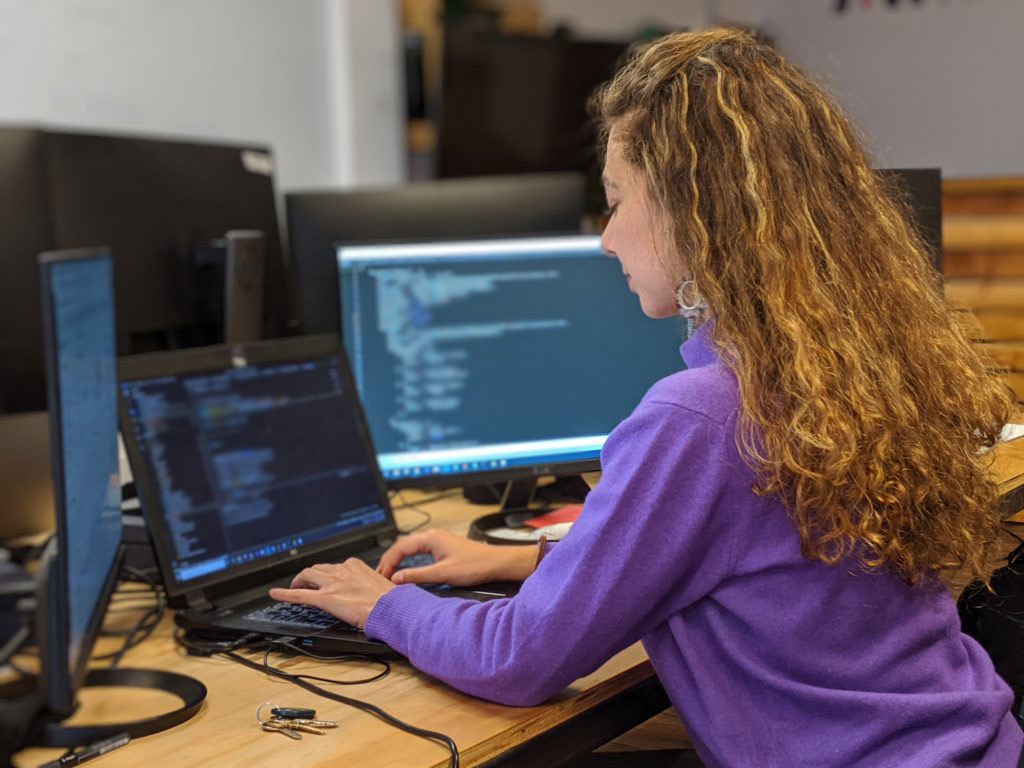 The Rise of Female Coders

In a historically male-dominated industry, we evaluate the gender gap in technology and speak to some of the female coders powering AMPLYFI’s innovation and success.

When you think of a coding workplace, an image of the stereotypical dark room filled with men tapping away at impossible code with no women in sight will likely spring to mind. And you might be justified in this thinking, with women only making up 20 percent of all computer science professionals and just 3 percent of female A-Level and university students saying that a career in technology is their first choice (Research from PwC). This shows the urgent need to close the gender gap in coding and, more broadly, STEM (Science, Technology, Engineering and Maths) industries. It’s time to reconsider the male domination of the coding workplace and recognise the female coders that have shaped and are redefining the industry.

From the very beginnings of computing, women have had a pioneering role. Ada Lovelace has been hailed as the first ever computer programmer, publishing the first computer algorithm and working on Charles Babbage’s plans for an ‘Analytical Engine’. It was the female technologist Grace Hopper who invented the first compiler — a program that translates programming code into machine language, one of the biggest innovations in coding. You’ve probably heard of Alan Turing and his code breaking at Bletchley Park during the Second World War, as depicted in the film ‘The Imitation Game’, but did you know that of the 10,000 people that worked alongside him, 75 percent were women? These women, such as Joan Clarke and Margaret Rock, undeniably helped Britain to win the war with their revolutionary breaking of German code. Fast-forward to NASA and women like Margaret Hamilton have made gigantic strides for technological advancement. As the lead software engineer of Apollo 11, she wrote the code that made the moon landing a possibility, one of the greatest achievements in human history. 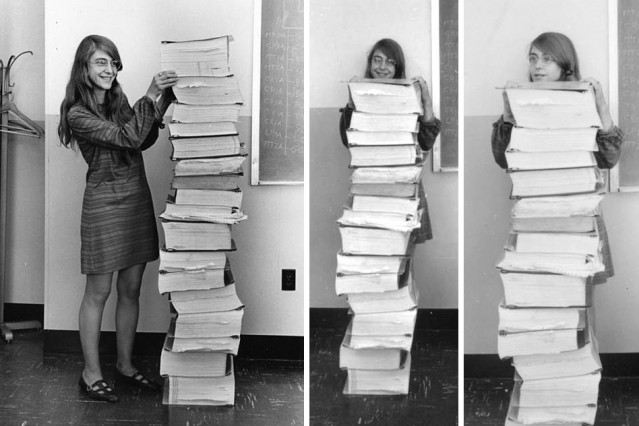 Margaret Hamilton poses with her code that made the moon landing a possibility (Photograph: Time) source: https://time.com/3948364/moon-landing-apollo-11-margaret-hamilton/

After a major decrease in numbers of women in coding after the 1980s, the situation for women coders is now dire, with only 13 percent of the entire STEM workforce in the UK currently made up by women. We caught up with three female members of our tech team here at AMPLYFI to discuss their experience as women in coding. Katerina works as a senior machine learning engineer and Carrie and Steph are both software developers — all of them are vital to making the innovations at AMPLYFI possible.

Carrie, Katerina and Steph all had almost identical stories of how they got into coding, having no idea or education about what it was until they happened to try it as part of their Engineering degrees at university and loved it. This is obviously a real issue as “many women don’t know what coding is so don’t know that they might like it” as Carrie tells, adding that in her experience, it was “really not socially acceptable to be a girl doing it”. This reflects that it is a combination of both societal beliefs and limitations in educational systems that are preventing women from exploring STEM industries.

What is your favourite thing about coding?

Carrie: “The fact that writing one small piece of code can make such a big difference and actually change things.”

Katerina: “How creative it is, as you are coming up with solutions and creating new things that can fix problems. Even though sometimes it’s frustrating trying to solve it, it’s so rewarding when you do.”

Steph: “The problem solving aspect, it’s like a puzzle.”

Outnumbered as women in the technology industry, one may expect tales of discrimination and hostile behaviour. However, they said that they have never experienced any negative treatment due to their gender. They’ve found that people are often shocked to see a woman in their job roles, seeing it as admirable and brave for them to be doing something so out of the ordinary. Carrie added that “people think you’re brave but I don’t feel brave — I’m just doing what I enjoy.”

Our female technicians feel encouraged to hear that the numbers of women on computer sciences courses are increasing, with their advice to anyone interested in pursuing a career in coding to “Start it!” (Katerina), with Steph adding to “Stick with what you’re interested in and work on it — definitely go into coding if you’re interested but don’t just do it to make money.”

How can we get more women into coding?

We need to change societal views on STEM subjects, educating and empowering children early on about the possibilities of coding. If we give girls positive role models and representation of women in technology as well as education about the possibilities, they will be able to consider careers they didn’t even know existed. We are already seeing this positive change, with coding and computer studies now being given more attention in UK school curriculums, making coding more widely understood and inclusive. Educational initiatives such as the Engineering Education Scheme Wales’ (EESW) ‘Girls into Stem’ programme also help to bridge this gap, giving female students the opportunity to gain insight into companies and organisations before they choose their GCSEs. By participating in this scheme, AMPLYFI helps to empower and encourage female pupils to pursue careers in STEM subjects, specifically technology.

This is supported by events held by organisations such as Women Who Code and Women in Tech, as well as broader momentum for closing gender gaps across STEM industries. These positive changes show the evolving climate of the tech industry and help to redefine girls’ potentials, paving the way for a more inclusive and diverse future of coding where women are given the chance to unlock their full potential.